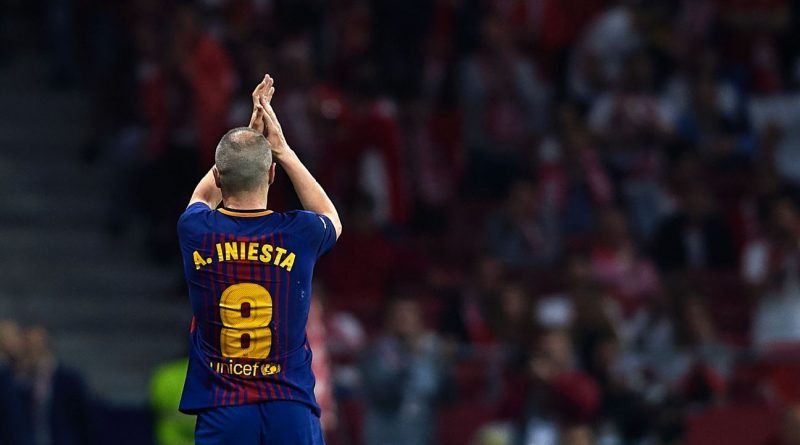 Desperate, the coach called one of his substitutes over and pointed toward the pitch at a small, pale kid in midfield, a year younger than everyone else out there, who was tearing his team apart. “See him?” he said. “Stop him.”

It was a regional game at the U15 level, the Catalan representative side had scored four or five already, and the substitute from another part of Spain — big, powerful and by his own admission a little wild, as desperate as the man sending him on — didn’t need telling twice. He also took the instruction too literally, running onto the pitch and kicking his opponent. Hard. “You’ve got two days left in football,” he said, trying to look as tough as he could.

Luckily for everyone, for football, he was wrong.

That was almost 20 years ago now, and. no, you’re not about to find out the name of the player who did it (although he’s mighty happy he was wrong) but as you’ve probably guessed, the name of the kid he kicked was Andres Iniesta Lujan, winner of 35 titles (more than one for every year of his life) starting with a league in 2005 and almost certainly ending with another, his ninth, on Sunday night in La Coruna. There have also been six Copas, the most recent surely to be known as “The Iniesta Final,” plus four Champions Leagues, two European Championships and the World Cup.

The 116th minute of the final in 2010 will always be his moment; that moment when he said he heard the silence in Johannesburg and so, 4,915 miles away in Fuentealbilla, his tiny Spanish hometown of 2,701, did his father Jose Antonio, until Mari broke it.

When the goal went in, everyone in the Bar Lujan, run by Iniesta’s granddad, erupted. At first, Iniesta’s mum, Mari, didn’t realise it was her son who had scored, but when they told her she set off running home to where Jose Antonio sat alone in the living room. Unable to take the nerves, he had turned the telly off. “Jose Antonio,” she shouted, “our little boy has scored! He scored! Andres!”

“I don’t know. All I know is that Andres scored!”

On Friday afternoon, Mari and Jose Antonio sat in the room as Andres announced he is going at the end of the season. “They brought me here by car 22 years ago and they’re here now,” Iniesta said. The club’s president was there, too, and some of his teammates (plus the media, of course) to hear him say he was leaving Barcelona and Spain too. He didn’t announce where he is going, but he did insist that he would never play against his club, so can’t stay in Europe: Mari and Jose Antonio’s little boy is heading to China.

He didn’t have two days left back then, but he does have just five left now: Deportivo, Real Madrid, Levante, Sevilla and then Real Sociedad. Iniesta’s last day at the Camp Nou will be May 20, 22 years after his first.

“Good afternoon,” Iniesta said. There was a pause, and then another. And another. “This press conference is to make public the decision,” he said, “that this season will be,” he said, “the last.” It was when he said “last” that his voice broke, for the first time, the word sticking in his throat. The delivery was slow. He gulped. Took a sip of water. Took a deep breath. Tried to carry on. Tears appeared in his eyes, soon escaping down his cheeks.

It was expected, an open secret for some time now, but that didn’t make it easy. Nor did the conviction that it was the right decision, but he explained why he felt that way, an honesty and self-awareness in his words.

“I feel at peace with myself,” he said.

Those around him have accepted the decision, of course — “Andres has earned the right to choose what he wants and when,” is a phrase that’s been repeated often recently — which isn’t to say everyone agreed. After last weekend’s Copa del Rey final, one headline pleaded: “Don’t go, Iniesta!” but Iniesta wants to go and he wants to go like this. He didn’t want to linger, bid farewell from the bench or ever feel like he wasn’t good enough any more. And he sensed that, two weeks from his 34th birthday, this moment might be close.

“If I had imagined a way of ending my spell here, it would have been like this,” he said. “Feeling useful, a starter, with the chance of winning titles and with the positive feelings I have had all year.”

“It’s a very difficult day for me because I have spent my whole life here and saying goodbye to my home is hard. But I understand that this is nature, life, natural law. What lies ahead is difficult. I would not allow myself to go through an uncomfortable situation at the club that has given me everything. I wouldn’t deserve that and nor would the club. I would never feel happy if I didn’t give the club my best.”

Soon, Iniesta knew (or thought he knew) he would not be able to do that. For more than a decade he has. “My only objective was to succeed here,” he said. “And I have.”

It went beyond that, of course. A little earlier, barely 10 minutes before Iniesta appeared, Madrid manager Zinedine Zidane had been asked about him some 450 miles away. “He’s a Barcelona player, but I don’t think of him like that,” Zidane said. “I think of him as football’s.”

Transcending teams, Iniesta was everyone’s, held close for the way he is as well as the way he plays. “I hope I am remembered as a good player and a good person,” he said. It didn’t sound like the platitude it might have from others, nor did it sound so implausible. On Thursday night, one former teammate talked of his sadness at the way football really is, the way people are. Andres, he said, was an exception. Others would agree.

Pep Guardiola once said: “Andres doesn’t dye his hair, doesn’t wear earrings and hasn’t got any tattoos. That makes him unattractive to the media, but he’s the best,” while Lorenzo Serra Ferrer, the coach who first called him up to train with the senior side, lamented “sadly, a humble, discreet footballer doesn’t sell like one who’s loud.”

And yet, if that meant people were slow to appreciate him, eventually it made him even more popular, not least because it was no pose or act. Failing to stand out made him stand out, his “normality” somehow considered abnormal. Zidane said he had not spent much time with Iniesta but that when he had he found him encantador. It doesn’t mean charming, not really; it’s more like “nice.” “He’s reserved, and then he shows it on the pitch,” Zidane said. “I like that.”

“I admire him,” Zidane continued. “I admire the way he plays.” They all do.

“If he had been called ‘Andresinho,’ he would have won the Ballon d’Or,” Sergio Ramos said on Wednesday night in Munich. What he said probably wasn’t true, but the sentiment that led him to say it was. The fact that he said it where he said it and when it said it was significant, too. Two days later, when it was official, others said similar things. France Football even apologised for the fact that Iniesta had never won their award. Messages flooded Friday from players at every club, with gratitude and appreciation in every one.

It is not just what he won; it is how he won. In his book “The Artist” — a book in which he preferred that others talk over doing so himself — the testimonies are glowing, the stories a record of a boy who always played differently. (Editor’s note: Sid Lowe was the translator and editor of the English language edition.)

“After five minutes we said: ‘take that little kid off, we’ve seen enough,'” remembered the coach who was at his trial at Albacete, Spain. Guardiola was Iniesta’s idol, his poster pinned on the wall by the bunk alongside others of Catherine Zeta Jones and Michael Laudrup. When Iniesta was 15, Guardiola signed a photograph for him, dedicating it to “the best player I’ve ever seen.”

On Friday, Guardiola offered his thanks. Players supposedly learn from coaches, he said, but not in his case: he learned from Iniesta. “I could say a lot of things, but basically [what sticks with me is] the pleasure of seeing him train, how everything was easy, I think the most impressive thing about him is how naturally he played: That is very difficult to find in a football player.”

It is the simplicity of it all, which is sometimes the most difficult thing of all. “Just a single control of Andres’s …” Ernesto Valverde said last Saturday, pausing to add, “… I’d have given an arm to have been able to do that when I played.”

It’s like Iniesta connects you to something more elemental. “What I do in the stadium, I did on the school playground,” he has said. That helps take him beyond titles, though no one in Spain has won more, and beyond goals or the assists, though he did score the most important Spanish goal ever. It’s not about stats; it’s about sensations, the way that he seems to glide as if he occupies some other place, almost trance-like, untouchable, however many people are around him. There is even a website dedicated to Iniesta that is just photos of him, surrounded by opponents — three, four, five or even six of them, yet they’re still somehow unable to take the ball off him.

There is a reason for that, one coach says, even if Iniesta is not conscious of it.

“Iniesta holds the ball so long, inviting pressure on himself and taking responsibility because, somewhere deep down, he knows that he is better than them,” he says. Some create space by moving away from the ball; Iniesta creates space by moving others towards it. Then, when the moment is right, he’s suddenly gone, wriggling free. Or the ball is passed on. “My teammates would have an easier life if I always had five men on me,” he said, saying much.

That’s real bravery. That’s taking risks, and football is richer for it. In a way, Iniesta rebelled, maybe even helped lead a revolution. Silently, of course, but a revolution nonetheless.

Iniesta vindicated a certain type of player, a style, an idea; he embodied something else, elevating not just Barcelona and Spain but the game, changing the culture, championing inspiration over intimidation. Go back to that match at the start of his career: they tried to stop Iniesta that day, just as they have tried many times since, but they couldn’t. He didn’t have two days left; he had many, many more, and they were the best days of his life. The best days of theirs, too. 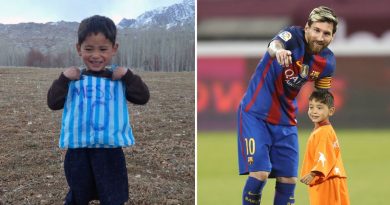 Dec 7, 2018 ayman022 Comments Off on Afghan boy who made Lionel Messi shirt out of plastic bag flees home again 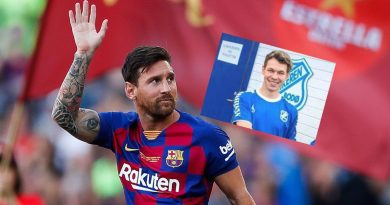 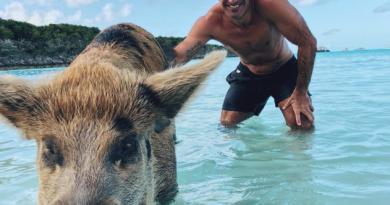