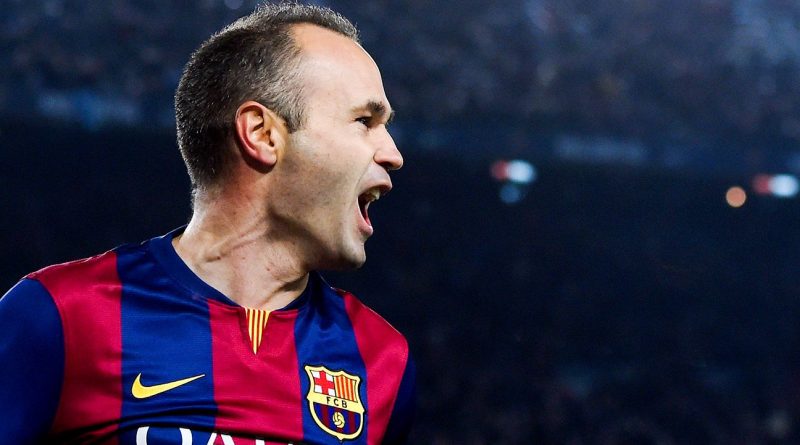 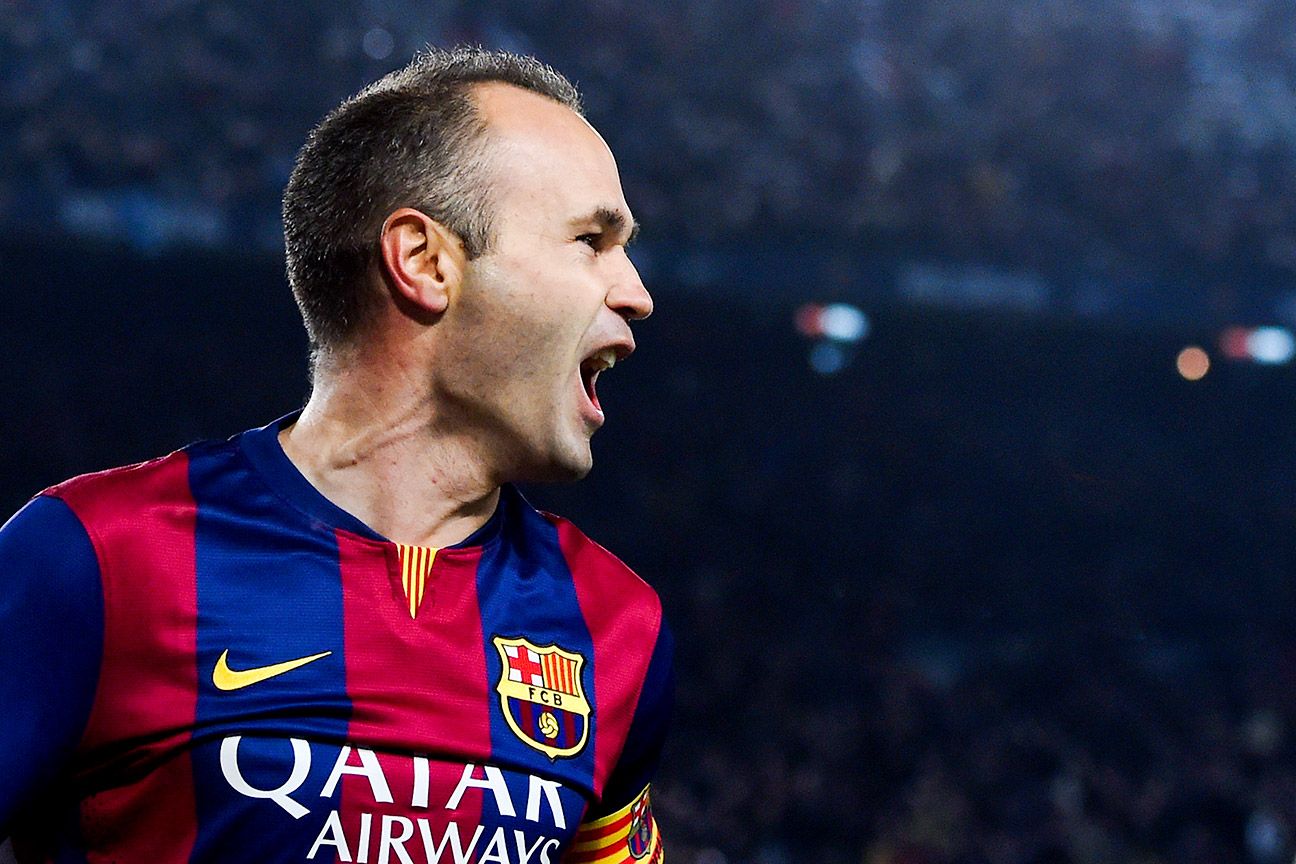 Andres Iniesta has been at Barcelona since he arrived as a pale-faced 12-year-old in 1996 but on Friday he confirmed it’s time to leave. Despite signing a lifetime contract earlier this season, the midfielder, who turns 34 next month, revealed in a news conference that he will walk away from Camp Nou at the end of the current campaign.

During his two decades in Catalonia, Iniesta has made 669 appearances (only Xavi Hernandez had made more) and has won 31 trophies. That will rise to 32 by the time he leaves, too, with Barca just one point away from a seventh league title in 10 years.

ESPN FC look back at 10 of the defining moments of his Barca career.

Iniesta still says the most important game of his career was his debut. It was the gateway to everything which followed. It’s been 16 years now since Louis van Gaal handed the 18-year-old Iniesta, still with a full head of hair at the time, his first Barca start in a Champions League game against Club Brugge. Barca won the game and Iniesta never looked back.

After his debut, it took Iniesta a couple of years to become a regular in the Barca side. By 2006, though, he was a key figure in Frank Rijkaard’steam. It was a surprise, then, when he was left on the bench for the Champions League final against Arsenal in 2006. However, Iniesta came on as a substitute at half-time as Barca came from behind to win 2-1.

“We all know the story of [the other substitutes, Henrik] Larsson and [Juliano] Belletti,” Thierry Henry, playing for Arsenal at the time, says in Iniesta’s book The Artist. “Sure, I know. But the person who really killed me was Andres. When he comes on, everything changes.”

If Iniesta’s Barca career had to be remembered in one moment, it would be this one. Teed up by Lionel Messi, the midfielder scored a spectacular strike from the edge of the box deep into stoppage time to send the Catalans into the Champions League final at the expense of Chelsea in 2009. It’s a moment which has gone down in Barca folklore as the “Iniestazo” and was re-lived in February when Iniesta returned to Stamford Bridge with Barca, setting up Messi’s second-half equaliser.

In contrast to 2006, Iniesta was never in danger of missing the 2009 final against Manchester United — even if he was injured. Despite the doubts over his fitness, coach Pep Guardiola always maintained that Iniesta would start the game. Rival coach Sir Alex Ferguson, meanwhile, singled him out Barca’s biggest threat: “He makes the team work,” the Scot said. “Guardiola and Iniesta make Barcelona. Rather than their forwards, it’s their midfield you have to watch.”

Iniesta played through the pain and set up the opening goal for Samuel Eto’o as Barca won 2-0 to complete their first-ever Treble.

Guardiola’s Barca won a second Champions League in three years in 2011, once again beating United in the final. While Messi, Pedro and David Villa formed a frightening frontline, it was the midfield — Iniesta, Xavi and Busquets — which was the team’s flagship. Iniesta, who had scored the winning goal in the 2010 World Cup final for Spain, was right in the middle as Barca stamped their mark on Europe in a way which few sides had done before them.

Barca’s penchant for a particular type of technical midfielder was never more evident than against Santos in the Club World Cup final in 2011. With Villa injured and Pedro on the bench, Guardiola fielded Iniesta, Xavi, Busquets, Cesc Fabregas and Thiago Alcantara all behind Messi. The result was devastating as Iniesta helped steer an increasingly unstoppable Barca side past a Santos team featuring a young Neymar. The game ended 4-0 and Iniesta was a world champion for club and country.

“The final against Santos was unique,” Iniesta has since said. “The way we won, the way we played, the way we did things… it was something to remember and enjoy.”

As the big game player that he is, some of Iniesta’s best performances have come against Real Madrid. He scored a well-taken goal against them in the 2011 Spanish Super Cup final as Barca won 5-4 on aggregate.

A year later, in the same competition, he showed off the grace and artistry he has become known for, gliding between defenders to set up his partner in crime, Xavi, to score. However, Madrid would go on to win the Super Cup in 2012 on away goals after a 4-4 draw.

Iniesta’s career can be summed up in numbers to an extent — nearly 700 Barcelona appearances over 30 trophies, etc — but they can never tell the full story. That lies in the images. Like the image of him receiving the ball 20 yards inside his own half with his back to goal against Paris Saint-Germain in the 2015 Champions League quarterfinal.

Effortlessly breezing past four opponents, he cruised into the final third and set up Neymar with a wonderful pass to round the keeper and score — a play which can be watched on loop. Under Luis Enrique, Barca went on to win the Treble that year. Xavi’s role diminished but Iniesta was still the side’s heartbeat.

There aren’t many grounds in Spanish football were Iniesta hasn’t been given an ovation — and that includes Madrid’s Santiago Bernabeu. Madrid fans took to their feet as Iniesta left the pitch in 2015 after setting up one and scoring another as Barca racked up a 4-0 win in the Spanish capital. Iniesta’s brilliance, and the sentiment towards him in Spain, transcends rivalries.

The scriptwriters really came up with the goods last weekend as Iniesta was cast in the lead role in the Copa del Rey final. Inconsistent in his final season at Camp Nou, he’s still been able to produce when it mattered. Case in point being the 5-0 win against Sevilla at the Wanda Metropolitan.

Iniesta ran the game like a 20-something again and crowned his performance with a brilliant goal, rounding the goalkeeper and rolling the ball home. He left the pitch to the umpteenth ovation of his career, with tears in his eyes and the curtains coming down on an incredible 22 years with Barcelona. 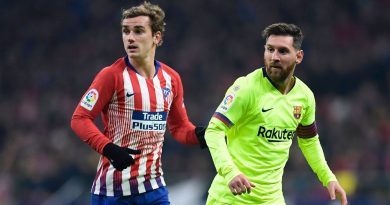 Griezmann can pick his club but Barcelona have Messi as bait

May 15, 2019 ayman022 Comments Off on Griezmann can pick his club but Barcelona have Messi as bait 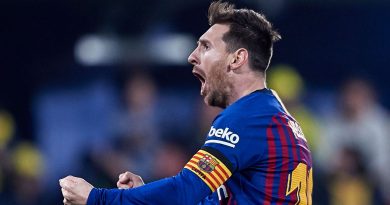 Apr 3, 2019 ayman022 Comments Off on Messi to the rescue again off the bench as Barcelona rally for wild 4-4 draw at Villarreal 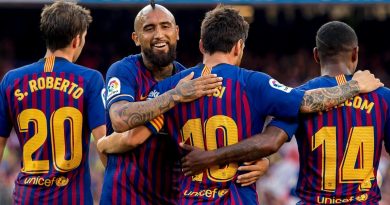