Arsenal and Tottenham Hotspur will renew their long-standing rivalry at Emirates Stadium on Saturday, but this specific fixture hasn’t been much of a contest in recent years. Spurs have not won a Premier League game at the home of their closest enemy since November 2010, when manager Harry Redknapp masterminded a recovery from 2-0 down to win 3-2, sparking his counterpart Arsene Wenger to slam a bottle of water into the ground in disbelief.

It was such an iconic moment for Tottenham that it appeared in a video montage before every home game at the old White Hart Lane. Yet, it is also a moment without much competition in recent times, not in the context of league visits to Arsenal, where they have lost on seven of their 11 outings since, conceding 27 goals in the process.

There are undoubtedly questions for Arsenal to answer — more of that later — but this record is indicative of a fragile Tottenham mentality that Antonio Conte is aiming to alter.

Since the beginning of the 2010-11 season, Spurs have won just nine of 61 away league games at Arsenal, Liverpool, Manchester City, Manchester United and Chelsea. They were beaten 37 times. Conte secured a notable win at City last term but this season, their sole visit to a traditional Big Six side came against Chelsea in August and they were lucky to escape Stamford Bridge with a 2-2 draw as Harry Kane equalised deep into added time.

The best thing about third-placed Spurs at the moment is their points tally: 17 from a possible 21. It is difficult to highlight a performance in which they were authoritative throughout; even in putting six past Leicester City just before the international break, they required a hat trick from Son Heung-Min in the final 17 minutes to make the points safe against a team rooted to the bottom of the table.

They have, however, found a way to stay in matches and, for the most part, go on to win — signs of a trend that has been credited to Conte’s increased demands and a deeper squad. They can make a real statement of growth in that area on Saturday by finding a way to beat an in-form Arsenal side, who are top of the table with 18 points, and it bodes well for Spurs that Son has shown further indications of a personal revival — scoring in both South Korea‘s matches during the international break against Costa Rica and Cameroon — given the likely pattern of the game.

Spurs have averaged 49.4% possession in their seven Premier League matches so far, notably less than Arsenal’s 57.2%. At Chelsea in August, perhaps the most comparable test to Arsenal, Spurs had just 36.5% of the ball and a counter-attacking approach is highly likely this weekend.

Before the teams met at the Tottenham Hotspur Stadium in May, Gunners boss Mikel Arteta conveyed what he believed was the key component of their tactical plan, as revealed in the Amazon “All or Nothing” documentary.

“We have to counter-press and put the ball under pressure as quick as possible,” Arteta told his players during a training session. “In two passes, they don’t manage the ball well, we can kill them because we are 20 metres away from goal. And that’s the game we have to play. It’s clear.”

It may have been clear, but Arsenal subsequently lost 3-0 and with it, all momentum in the race for Champions League qualification which Spurs won on the final day of the season. They weren’t counter-attacking moments but Son’s direct style, so key to transitions, caused the damage. Cedric Soares fouled Son as he burst into the box to compete for a header, allowing Kane to open the scoring. Then, Rob Holding was sent off for two fouls committed while trying to contain Son, the second blocking his run as the forward attempted to connect with Eric Dier‘s raking pass (not pressed by Arsenal’s attacking players.)

Holding was captured on the Amazon cameras lamenting the situation as he returned to the Arsenal dressing room, saying: “Should have never been one vs. one in the first place… all the time, one vs. one.”

As Arsenal have signed more players suited to his philosophy, Arteta has sought greater control in matches and the fact Gabriel Jesus and Gabriel Martinelli were not selected for Brazil and have therefore remained at London Colney over the past 10 days could be significant advantage. Both players are key to the press and counter-press Arteta describes but they must be more balanced than against Manchester United, who countered their way to a 3-1 win earlier this month in Arsenal’s only defeat of the season so far.

However, even at Old Trafford, the Gunners controlled the match and could easily have gone ahead with the score at 1-1 before a lightning counter-attack allowed Marcus Rashford to put United in front. Arteta unbalanced the team further with the introductions of Emile Smith Rowe, Fabio Vieira and Eddie Nketiah in pursuit of an equaliser but it only created more space for United to attack, with Rashford adding a third.

Whether Spurs can be as efficient as United were that day is a key question for their big-game mentality. Kane certainly has it, particularly against this opposition: the England captain has 13 goals in 17 games vs. Arsenal. He has only scored more against Leicester (20 goals in 19 games) and Everton (14 in 15.)

Conte may be tempted to adapt his 3-4-3 system to add an extra midfielder, given not just Arsenal’s numerical advantage but also residual memories of the way Spurs were eviscerated in central areas in this fixture last season. Nuno Espirito Santo — remember him? — sent Spurs out with a central midfield of Pierre-Emile Hojbjerg behind Dele Alli and Tanguy Ndombele. Hojbjerg retreated, Alli and Ndombele pushed on and the combination left a chasm in the middle of north London which Arsenal ruthlessly exploited. Spurs conceded three times in the first 34 minutes and lost 3-1.

With last season’s defeat in mind, Arsenal are likely to be similarly aggressive this time. However, Conte will presumably have more faith in Hojbjerg and Rodrigo Bentancur, with Kane dropping deeper if required to feed Son and Dejan Kulusevski. Richarlison‘s recent form also makes him an intriguing alternative, especially as Kulusevski is a doubt for the game with a hamstring problem.

North London derbies have increasingly been influenced by home advantage. The last away win in the league for either side came when Tomas Rosicky gave Arsenal a 1-0 victory in March 2014, although Spurs did triumph in an EFL Cup tie at Emirates Stadium in December 2018. Both have started well, but each side needs a statement victory to reinforce their credentials for the challenges ahead.

Such has been the dominance of City and Liverpool in recent times, matches between Arsenal and Spurs have existed in the shadows of title challenges elsewhere. A commanding victory here would offer hope one of these sides could soon step into the light. 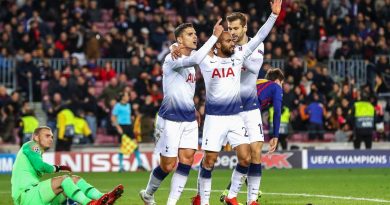 Dec 12, 2018 ayman022 Comments Off on Spurs sneak into UCL knockout rounds after fighting back for draw at Barca 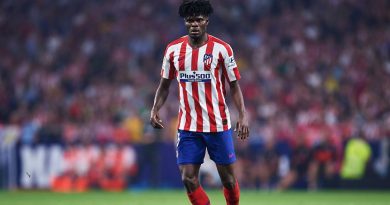