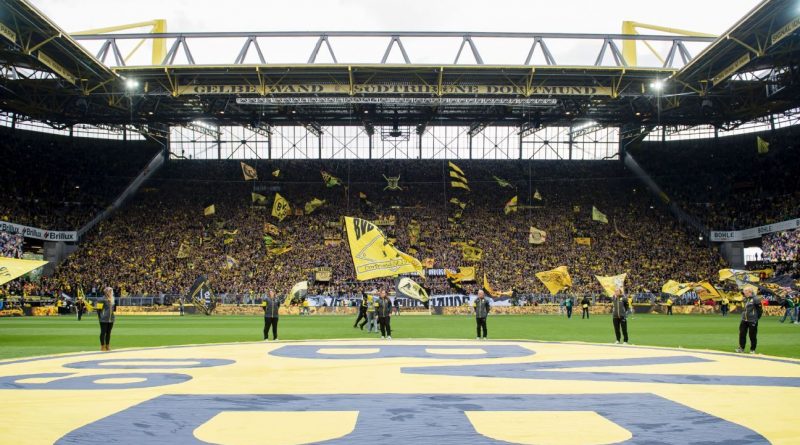 Borussia Dortmund arrive in Los Angeles for the first stop of a two-legged U.S. tour this week facing a difficult future. With internal conflicts and recent failures on the pitch, the shadow of Jurgen Klopp still looms over the club.

But there is one thing that will set their rebuilding process apart from others.

“The best thing that can happen to us is a sold out Signal Iduna Park. And it must be boiling,” Carsten Cramer, Dortmund’s director of sales and marketing, tells ESPN FC. “That is Borussia Dortmund. That is our unique selling point. That is what makes us so attractive abroad and at home.”

Football clubs, like every brand, distinguish themselves by telling a story. And Dortmund’s is about the love between fans and their club.

A history of industry

Up until the 1990s, the city of Dortmund — part of the Ruhr Area, Germany’s old industrial heart — was dominated by steel company Hoesch and a vast variety of breweries who had a total output of 7.5 million hectolitres by the mid-1960s. But with globalisation came the end of Dortmund’s two biggest industries. In 2004, a Chinese company dismounted the Westfalenhutte site, once home to 25,000 employees, shipped it to the Far East and rebuilt it.

The breweries all but disappeared but while new industries cushioned the blow, the constant that remained was Borussia Dortmund, founded in 1909 at the Borsigplatz, a short walk away from the Westfalenhutte.

It’s there where the club’s heart still beats. Its reach stretches from the Borsigplatz, Dortmund’s Walk Of Fame — where over 100 bronze stars, each representing a landmark in the club’s past, are embedded in stone on the pavement — to the Signal Iduna Park stadium, still widely called Westfalenstadion by the club’s fans, opened in 1974 but re-named during the financial crisis in 2005.

“That’s where we come from,” Cramer adds. “That’s our home, that’s where are our roots are.”

After a golden period of success in the mid-1990s which saw Dortmund win back-to-back league titles and become the first German side to win the re-branded Champions League in 1997, the club slumped amid a revolving door of coaches (including three in one year).

Basing their transfer policy around old friendships rather than expertise, Dortmund paid significant signing-on fees for the likes of Victor Ikpeba and Thomas Hassler, but none left a mark.

A boost was needed and with no European football, plans to generate new cash were made. In 2000, they became the first German club to go public on the stock market.

It worked. The influx of money and big player arrivals — including Tomas Rosicky, Jan Koller and Marcio Amoroso — meant Dortmund won their first title in six years in 2001-02 under Matthias Sammer, but lost the UEFA Cup final to Feyenoord.

Yet money was not enough. Dortmund needed a boost off the pitch too and then-president Gerd Niebaum and director Michael Meier turned to the fans. The club created the iconic Sudtribune (otherwise known as the Yellow Wall): a 25,000-standing capacity terrace behind one of the goals, nearly doubling the capacity from 13,000 after already building upper tiers on top of the old seating area at the West and Sudtribune.

As the stadium grew, Dortmund invested into “bricks and bones” to strengthen their connection to the fans. But there were other issues.

A golden future at the Westfalenstadion, which by now had reached 80,000 plus capacity for domestic games, had seemed assured. It had become the biggest stadium in Germany, but it was soon sold on to a property fund, Molsiris, and leased back for around €16m a year. All the funds from their stock market flotation were gone.

On the pitch, BVB were unable to follow up the 2002 title, and on the final day of the 2002-03 season they drew with already-relegated Energie Cottbus and lost their place in the Champions League.

The TV market had already collapsed after rights holder Kirch ran into financial difficulties and, in need of money, Dortmund were forced to sell players. Poor financial management and increasing debt saw the club descend into crisis.

“We were all deeply worried,” goalkeeper Roman Weidenfeller told ESPN FC. “As players, we could only do whatever was in our hands and take care of the sporting side. It was important the players stayed, and also took a pay cut. I waived around 20 percent of my salary in the year of the crisis. At that time, all of us players became one unit. That’s how we survived, that’s one of the reasons the club is still here.”

Another reason was the support of the fans. In February 2005, BVB’s Ultra groups, most of them formed in 2001 to bring back the noise to the Westfalenstadion, organised protest marches — first at the away match in Hannover and then again before the home match against VfL Bochum the following week — and that movement pushed the club into action.

On the brink of bankruptcy, Dortmund were rescued when the investors of the Molsiris fund agreed to some major changes in March 2005. Niebaum and Meier were replaced by a new hierarchy, headed by CEO Hans-Joachim Watzke and Reinhard Rauball, who returned as president for a third time.

New faces won trust and the second major rebuild of the club began.

A stadium of unconditional love

In late 2005, the new leadership sold the naming rights to the Westfalenstadion to local insurance company Signal Iduna.

While it has not been accepted by many fans almost 13 years later, the new name helped to secure financial stability — though it was a 15-year loan of €79m from Morgan Stanley (repaid within two years), which allowed the club to repurchase the remaining stake in their stadium from Molsiris.

In 2007, with the club battling relegation in another three-coach season, the fans came to the fore again.

“The club was saved by the ‘never say die’ spirit of their supporters, whose ‘We are Borussia’ campaign resulted in Dortmund’s community of citizens, companies and public authorities combining to help repair the finances,” wrote financial analyst Swiss Ramble in 2012, as the club eventually finished ninth and denied local rivals Schalke the title with a win towards the end of the season.

Yet after years of upheaval, and one year after Klopp’s arrival as manager from Mainz, in 2009 The Times named the Signal Iduna Park the best stadium in Europe, writing: “This place was built for football and for fans to express themselves. Every European Cup final should be held here.”

With a new, safer financial outlook and the team under the guidance of Klopp, the club showed signs it could return to the top once more. Dortmund’s rise went alongside that of social media and hundreds of thousands of football fans worldwide saw an exciting, young team with a highly motivated coach playing attractive football.

The Sudtribune became a place of pilgrimage for football fans all over the world. And those lucky enough to watch from the stand saw previously unknown players such as Mario Gotze, Robert Lewandowski and Shinji Kagawa beat the dominant Bayern Munich to two league titles in 2011 and 2012.

The club coined the phrase “Echte Liebe” (real love) for the rise of Dortmund. As Klopp became one with the squad, the club and its fans, BVB’s remarkable comeback was the big story in European football.

As midfielder Nuri Sahin told the Players’ Tribune in 2017: “Echte liebe. It means true love — and to love without any conditions. That’s the Borussia spirit. That’s our strength.”

However, after losing in the 2013 Champions League final, Dortmund plateaued. Bayern Munich overtook them domestically, also stripping the club of exciting young players like Gotze and Lewandowski. Others, like Sahin and Kagawa, left too. Some returned, but the novelty had worn off.

Dortmund reached cup finals, but have not challenged Bayern in the league since 2012, unable to cope with high-profile exits to their biggest rivals for the Bundesliga crown. “A club like Borussia Dortmund must be able to take this,” Cramer says. “We must not define ourselves over a superstar, but over what characterises us as a club. Also, not to be hit by a major depression should players leave us.

“We neither have the resources nor does our brand shine as bright as that of Barcelona or Real Madrid. We are from Dortmund. And our history with its starting conditions, away from the big European metropolitan areas, is what people also like.”

“What we also stand for in a global perspective, what makes us interesting also for other clubs is the way we develop young players,” Cramer says. “It fascinates others why players like Pulisic, like Jadon Sancho or [former La Masia midfielder] Sergio Gomez believe they can make a big step here at Dortmund.”

Over the last two seasons alone, BVB have received over €350m in transfer fees, and spent close to €240m. A far cry from the financial mismanagement of the late 90s and early 2000s.

But as stars left and younger players came in, the culture at the club changed. Following a turbulent 2016-17 season, which saw the team survive a bomb attack on their team bus ahead of a Champions League match against Monaco and lift the German cup only six weeks later, rifts became evident.

First, coach Thomas Tuchel was sacked after disagreements with the management and rising star Dembele forced his way to Barcelona by going on strike. During the 2017-18 season, Dortmund had two coaches, crashed out of Champions League with just two points from six games, and nearly fell at the Champions League hurdle. They got over it, but with scars.

“We bought of a lot of quality. But with it we lost a bit of identification with the club,” Weidenfeller says. “We must also look at the mentality of players we sign.”

To do so, two of the club’s former greats have returned in newly created positions. Former captain Sebastian Kehl will act as a new bridge between the club’s offices and the team and Sammer returns as an advisor. With the help of the duo, the club hope to steer into calmer water and keep up the intensity.

The fans are still key to the club’s future

Weidenfeller is set to retire from professional football after Dortmund’s match at LAFC this Tuesday.

After his final home game, a 2-1 defeat to Mainz on May 5, the 37-year-old grabbed a megaphone, teetered on a podium overlooking the Sudtribune, and sang: “There will never be another club, we will always be Borussen.”

“They’ve been there for me for 16 years,” Weidenfeller tells ESPN FC. “It just means the world to me to say goodbye to them. They supported us through thick and thin. I thanked them for their support. The stadium, but most of all the Sudtribune.

“Those fans have not only literally been behind me in the stadium, but I also know quite a few of them personally, and I can sense the emotions they have for this club. It’s so important to be able to relate to them. There are fences in the stadium. But you can cross them, you can take them down in your mind. I had to go up there and get right into the throng.”

A week later, Dortmund secured Champions League football despite a 3-1 loss at Hoffenheim as the club looks to bring some stability and challenge Bayern Munich once more. Next season, Swiss coach Lucien Favre is set to become Dortmund’s new coach — the fourth since Klopp left in 2015 — and will have high hopes that the Sudtribune can inspire his players to greater heights.

BVB have become a household name in European football, but in recent seasons positive headlines have been rare and the next crisis has always appeared to be around the corner.

But their first trip to the United States, and Los Angeles, marks a watershed moment for the club. Breaking new ground, with the power of their next young star Pulisic behind them, the Sudtribune may have a few new faces in the coming years. 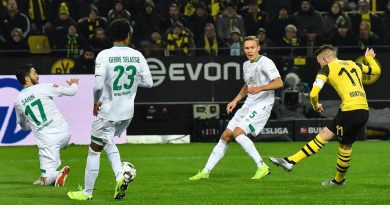 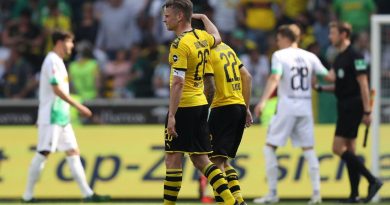 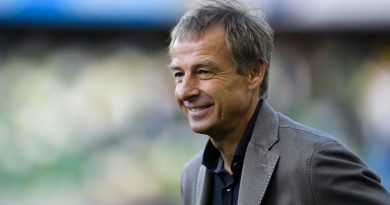