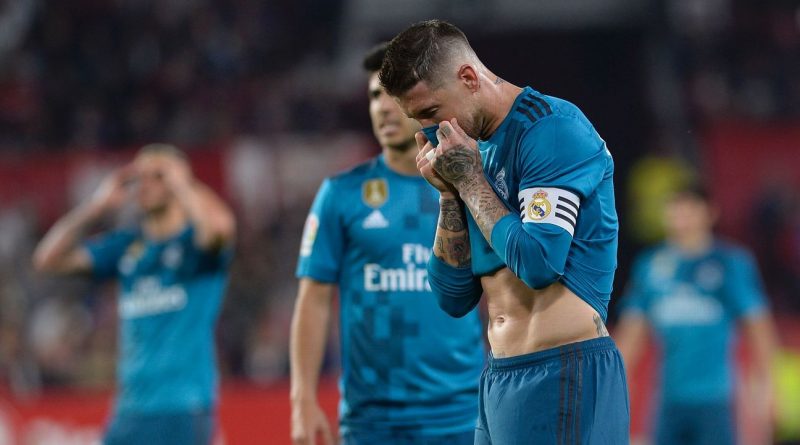 It was another day at the office for Real Madrid against Sevilla in La Liga on Wednesday night as their Jekyll and Hyde season continues. They suffered for large spells of the match and looked in danger of conceding every time the hosts attacked. Despite a late fightback, it was too little, too late as they remain three points behind rivals, Atletico Madrid for second place.

The end is near, in two senses. This wretched La Liga campaign is almost over and that means a couple of squad players can move on to pastures anew. Real Madrid need to rethink their entire squad and the options they have in key positions. The chance to do that is just around the corner.

Real Madrid’s defending looked problematic from the very start. This was a tedious performance from Real Madrid in attack also, who have something seriously wrong with them in the league.

5 — At 2-0 down in the second half, Zinedine Zidane didn’t make a change until the 70th minute and then not another one until the 87th when they were 3-0 down. Some sympathy for Zidane given the fact that the game didn’t mean much but they are still fighting for second and this was abject for large spells.

GK Kiko Casilla, 6 — Nutmegged for the first goal. A dangerous pass to Theo Hernandez under pressure almost led to another in the second half. Made a couple of saves but it was difficult when his defence was like a sieve in front of him.

DF Nacho, 5 — Looked to be out of position for the second goal as he didn’t track back when necessary. Looked off the pace after coming back from injury but Real Madrid were under the cosh whenever Sevilla attacked even if he was Real Madrid’s best defender.

DF Sergio Ramos, 4 — Caught on the wrong side of Wissam Ben Yedder for the first goal. He was out of position time and time again. Missed a penalty and had an own goal. Scored his second penalty of the night but that was scant consolation.

DF Jesus Vallejo, 4 — Lost out to Luis Muriel, a striker half his size, for the header that lead to Sevilla’s first goal and was shaky every time the ball came near him after that. Tried a needless crossfield pass to Theo at the end of the first half that went out for a throw. That effort summed up his night.

DF Theo Hernandez, 3 — Hopeless effort to track Gabriel Mercado for Sevilla’s third goal. Marco Asensio was forced wide in search of room and this prevented Theo from getting into open space on the overlap. Waited for the ball to come to him and almost gifted Sevilla a goal in the second half as well.

MF Mateo Kovacic, 5 — Ran into trouble too many times, which is uncharacteristic. Caught between a poor defence and a stagnant attack and offered nothing.

MF Casemiro, 5 — Another player who was caught between two lines and didn’t know what they were doing. Far from effective but not Real Madrid’s worst performer. Had a rasper of a shot that nearly went in during the second half.

MF Dani Ceballos, 5 — A vanilla flavoured performance from a player who has had a terrible year and must be dreaming of that last game of the season. He hasn’t played much but when he has his confidence looks shot. That was the case again on Wednesday night and was on display when he threw a tantrum after he was taken off.

MF Marco Asensio, 6 — One of Real Madrid’s most inventive players but that’s not saying much. He tried to create but often found himself pinned into areas of the field where he couldn’t do anything. A frustrating night but had a nice assist for Mayoral even if it was a consolation.

MF Lucas Vazquez, 6 — Ran into trouble in the centre too often and looked frustrated with Sergio Escudero’s close attention. This was partly down to Sevilla’s impeccable set-up too. He won a penalty though and never stopped trying, which is par for the course.

FW Karim Benzema, 5 — Back to his pre-Bayern form. Inconsequential. He didn’t have a shot on target and the couple of efforts he hit wide were very wide and poorly struck.

FW Borja Mayoral, 7 — Replaced Ceballos after 70 minutes. Even before his consolation goal, he looked lively and wanted to make something happen, which he inevitably did.

MF Marcos Llorente, NR — Only got a couple of minutes as he replaced Casemiro late on. Made no impact on the game either way. 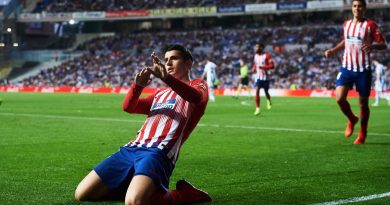 Feb 17, 2021 ayman022 Comments Off on Atletico Madrid’s Luis Suarez says ‘no one will get rid of me’ until he’s ready 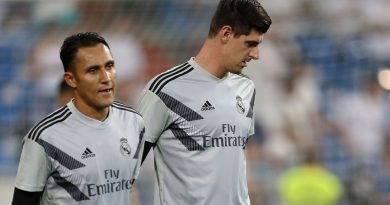 Thibaut Courtois vs. Keylor Navas battle could be weak link for Real Madrid

Sep 14, 2018 ayman022 Comments Off on Thibaut Courtois vs. Keylor Navas battle could be weak link for Real Madrid