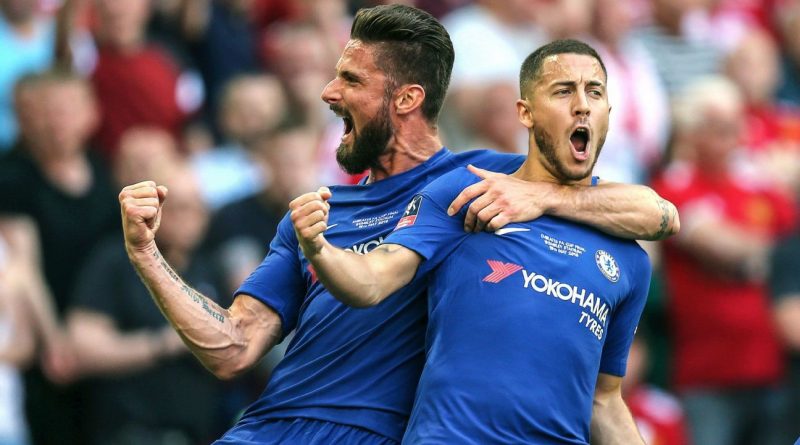 Antonio Conte guided Chelsea to the second major trophy of his two-year reign by overseeing a 1-0 FA Cup final win against Manchester United, but the trophy is likely to be his farewell gift as manager.

Eden Hazard’s first-half penalty, after the Belgian was fouled by Phil Jones, was enough to secure the cup for Chelsea 12 months after Conte’s team were denied a Premier League and FA Cup double following defeat to Arsenal in the Cup final.

But against a United team that struggled to come to life until the second half, Chelsea were able to hold on for victory at Wembley.

Conte’s failure to guide Chelsea into the top four and secure Champions League football next season is expected to cost the Italian his job at Stamford Bridge, however. The former Juventus coach remains a popular figure among the Chelsea supporters, but there is little expectation of him being in charge for a third season next term.

In contrast, Jose Mourinho will remain to rebuild at United. But after ending the season without a trophy, the pressure will be on the Portuguese to make the team competitive in the Premier League.

United may have finished runners-up behind champions Manchester City, but it was a distant second, and the lack of entertaining football at Old Trafford is also weighing heavily on Mourinho. He will at least survive for another shot, however. Conte is unlikely to get that luxury.

2. Hazard shows United what they lack

Hazard’s first-half-penalty opener came from a burst through the middle by the Chelsea forward, which left Manchester United defender Jones all at sea before he eventually brought the Belgian down.

It was a classic example of a talented player hurting a team by running at them in the heart of the pitch, and it was a devastating break by Hazard. It also highlighted the absence of a similar player in the United lineup, with Mourinho’s team painfully predictable with their sideways passing and struggles to cut through the heart of the Chelsea XI.

United improved in this area after the interval, having been poor during the first half, but they were still lacking the explosive quality of a player like Hazard. Juan Mata, who started the game on the substitutes’ bench, lacks the pace or power to perform the Hazard role, but Paul Pogba should be that man for United. As the game wore on, the £89 million midfielder showed glimpses of his ability to do it, but if United are to challenge for the Premier League next season, they need to invest in player capable of making a crucial difference in the final third like Hazard does.

United need a player like Luka Modric or David Silva, or even Hazard, but they are not easy to come by. Without one, they will continue to be easy to defend against and their forwards will be starved of services

The big question now is whether Chelsea will still be able to count on Hazard — who made his 300th Blues appearance on Saturday — next season, or whether he will move elsewhere.

Without him, they would be as predictable as United.

Jones and Chris Smalling have played almost 500 games between them for United, but this was another one of those occasions when the centre-halves performed as though they had just been introduced in the dressing-room before the game.

Eric Bailly, United’s best defender, will wonder why he continues to be overlooked by Mourinho with Jones and Smalling making a habit of giving their manager nightmares when they play alongside each other.

At the end of January, the pair of them were given a torrid time by Harry Kane as United lost 2-0 to Spurs at Wembley, and they have been up and down ever since.

Neither are particularly comfortable on the ball, and both are prone to rash tackling and poor decision-making, so Mourinho’s decision to use them as a central defensive partnership is bewildering.

England manager Gareth Southgate has already given up on Smalling. Having cited Smalling’s poor ability on the ball when dropping him from the squad earlier this season, Southgate left him out of the travelling party for the World Cup earlier this week.

Jones made the cut, perhaps because he can also play at right-back and central midfield, at a push, but his performance in this game will have concerned the England manager.

He was twice outfoxed by Hazard in the opening 20 minutes, the second time when he conceded a penalty with a clumsy foul after misreading a throughball to the Chelsea forward.

It was a warning sign of what may happen when England face Belgium in Kaliningrad next month, but the good news for Southgate is that, at the other end of the pitch, Gary Cahill was outstanding for Chelsea. 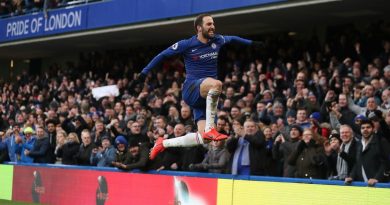