Second-placed Inter Milan were held to a third successive 1-1 draw after Radja Nainggolan, a player they loaned to Cagliari for this season, scored a second-half equaliser for the Sardinian side in their Serie A match on Sunday.

The fiercely competitive Belgian, who was told by Inter coach Antonio Conte that there was no place for him this season, stunned the San Siro with a 78th-minute goal to cancel out Lautaro Martinez‘s first-half opener for Inter.

Martinez was sent off in stoppage time for his furious reaction after being given a yellow card for a foul and had to be ushered away by team mates as he continued to remonstrate with the referee.

Inter have 48 points from 21 games, three behind Juventus who were away to Napoli later on Sunday, and three more than third-placed Lazio who meet AS Roma.

Inter, with a midfield depleted by injuries and suspensions, gave Ashley Young his debut and the former Manchester United player set up their goal in the 29th minute with a cross which Martinez met with a powerful header.

Cagliari protested that Martinez had pushed a defender and VAR officials finally confirmed the goal after a two-minute delay.

Alessio Cragno saved another Martinez effort with his feet but Inter did not have it all their own way and goalkeeper Samir Handanovic had to palm away a looping header from Paolo Farago before halftime.

Stefano Sensi was twice close for Inter in the second half but they failed to add a second goal and paid the price.

Joao Pedro pulled back the ball from near the corner and it ran on to Nainggolan whose low drive from 25 metres took a deflection and went in off the foot of the post.

Romelu Lukaku was centimetres away from putting Inter back in front but their frustration boiled over in stoppage time with Martinez’s red card. 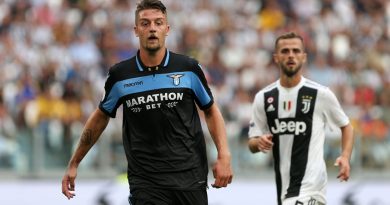 Barcelona have ‘great future’ with Gavi, Nico at club