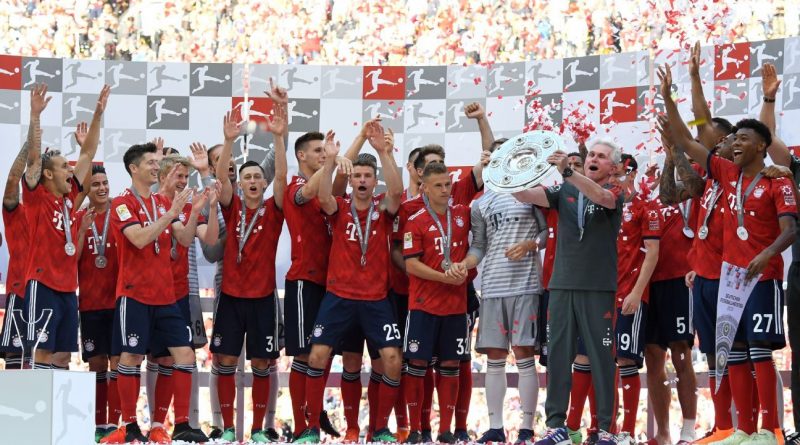 Bayern Munich suffered their heaviest defeat of the season, losing 4-1 at home to Stuttgart, which dampened the champions’ wheat beer celebrations to mark their sixth successive Bundesliga title.

Blessed with lovely sunny weather for the 100th “Southern Derby” and with returning legends present, from Franz Beckenbauer to Michael Ballack, Bayern’s faithful grasped the opportunity to celebrate their 27th Bundesliga win.

Bayern saved their worst performance of the season for an expectant home faithful, succumbing to a first home Bundesliga defeat and the heaviest loss of the campaign against a Stuttgart side they had previously beaten 13 times in succession in league play.

Evidently a cloud hangs over following another Champions League semifinal exit and Bayern will need to snap out of it in Berlin next Saturday if a 12th domestic double is to be won in the DFB-Pokal Final vs. Eintracht Frankfurt.

10 — Jupp Heynckes celebrated his 73rd birthday in midweek but, on the occasion of his last match in Munich, his players didn’t give him a proper send off. He gets a 10 anyway and will be missed immensely.

GK Sven Ulreich, 6 — Could do nothing about any of the goals scored by his former club. He collects his third straight Bundesliga winners’ medal, but it’s the first for which he has really made a serious contribution.

DF Rafinha, 5 — Having agreed a contract extension until next year on Friday, he didn’t enjoy one of his better days as Bayern were run ragged on the counter.

DF Niklas Sule, 5 — Always a threat from set pieces but couldn’t handle Stuttgart’s speedsters as his lack of pace was regularly exposed. A champion in his first season at the club, he played in 27 league games, more than Jerome Boateng (19) and Mats Hummels (26).

DF Mats Hummels, 5 — He couldn’t cope with Stuttgart’s rapier-like thrusts and showed his frustration with a nasty foul on 85 minutes, deservedly picking up a yellow card.

DF Joshua Kimmich, 5 — He didn’t excel against the club where he started his career. Some naïve defending, coupled with surging runs — to no avail — down the right flank.

MF Thiago, 5 — He missed a great chance to reduce the arrears on 73 minutes but was denied by a marvellous reflex save from VfB keeper Ron-Robert Zieler.

MF Corentin Tolisso, 7 — Bayern’s record signing scored for a second straight week — his sixth goal of the season — and nearly followed with another but Zieler somehow parried. Tolisso came off at half-time; one can only assume he was injured as he had been Bayern’s best players to that point.

MF James Rodriguez, 6 — Another debut Bundesliga winner, Bayern’s best signing of the season was always probing but nothing really came off for the Colombian playmaker.

MF Franck Ribery, 5 — Ribery is the only foreigner to win eight titles and draws level with German legends Oliver Kahn, Philipp Lahm, Mehmet Scholl and Bastian Schweinsteiger. Ribery was not at his best on Saturday and Heynckes will be glad that Kingsley Coman might feature in the cup final.

FW Thomas Muller, 5 — The stand-in captain is a seven-time champion but failed to impress and made way for Sandro Wagner on 68 minutes.

FW Robert Lewandowski, 5 — Laid on only his second assist of the season for the equaliser, but the inspired Zieler foiled efforts in each half to prevent Lewandowski from reaching 30 league goals for a third straight season. He received little applause upon picking up the top scorer’s prize, indicating his reduced standing with the Bayern faithful after public recent complaints.

MF Javi Martinez, 5 — Couldn’t do anything to prevent Stuttgart’s steamrollering of the German champions after coming on after the interval for Tolisso.

FW Sandro Wagner, 5 — Added his second Bundesliga title over a decade after his first, but this was a lost cause by the time he came on for Muller.

MF Sebastian Rudy, 5 — Flew unspectacularly under the radar once again after replacing the ineffective Ribery with 20 minutes remaining. 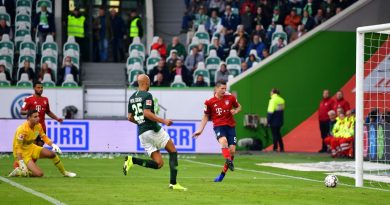 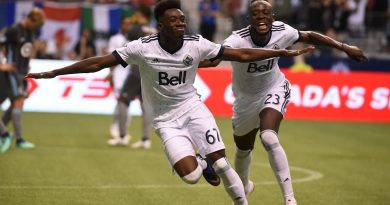