Ernesto Valverde thinks it will be “incredible” if Barcelona can create history by becoming the first team to finish a LaLiga season unbeaten.
Barca have cruised to the title in Spain, winning 27 and drawing nine of their 36 fixture so far.
Coach Valverde, in his first year at the Nou Camp, takes his players to Levante on Sunday before completing a remarkable campaign at home to Real Sociedad next weekend.
He feels the chance to set a new record has helped his players retain motivation after they secured the title two weeks ago.
“Now we have won LaLiga, we have to look for new incentives,” said Valverde at his pre-match press conference, according to Marca.
“After a long season, we can claim an unbeaten record. Let’s see if we can do it, that would be historic. Staying undefeated all season would be incredible.
“When your season is almost over, you always want to get to the end with everything won, with everything done.
“And when the final matches come with everything resolved, you miss a degree of urgency.
“We have a goal, which is none other than to keep us undefeated in this league campaign. I try to focus on that.”
Sunday’s opponents Levante have little left to play for having already avoided relegation thanks to a phenomenal recent run of form.
Paco Lopez’s 16th-placed side have won seven of their last nine games to move 14 points clear of the bottom three, with their only defeat in that time coming at second-placed Atletico Madrid.
Valverde believes they have previously underachieved.
“I had always thought they had enough quality to finish higher,” he said. “And in recent weeks they have accumulated an incredible amount of points.
“Now they are in that moment of calm and confidence.”
Levante coach Lopez hopes to continue the good results by recording a memorable win which would end Barca’s 43-match unbeaten run.
“Our intention is to make a good match and (one) that people come to enjoy. We are going to compete,” he told Levante’s official website.
“It would be historic to win against Barcelona, but it will not be easy. The idea is to compete, to do well and for the team to continue showing its identity.”
Lopez also dedicated the game to the club’s honorary president Paco Fenollosa following the death of his wife.
“I want to convey my condolences on behalf of myself and the staff to Paco Fenollosa who has lost his wife,” Lopez said.
“I want to send a strong hug to him and his family and dedicate the Barcelona game (to him).” 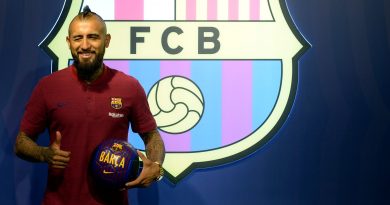 Vidal: I want to win every title with Barca 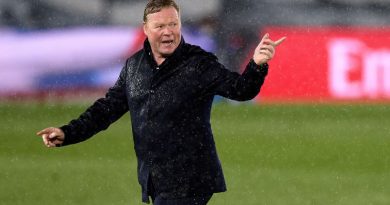 May 7, 2021 ayman022 Comments Off on Barcelona’s Koeman criticises two-game ban as ‘personal’ ahead of critical title clash