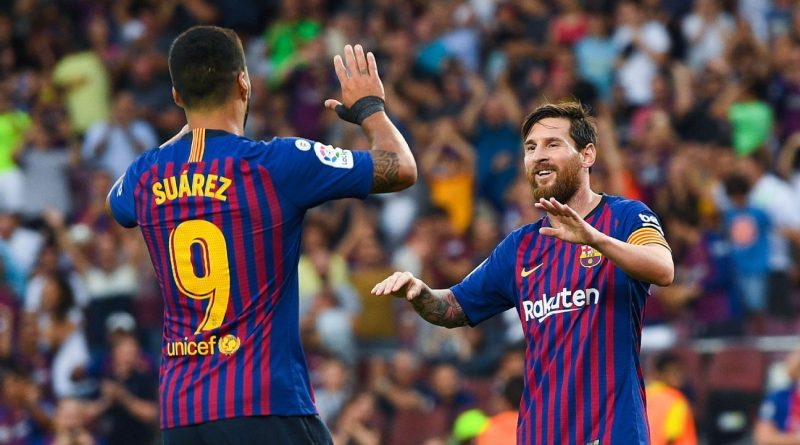 Barcelona thrashed La Liga debutants Huesca 8-2 on Sunday to move top of the table with a sensational display of attacking football that left the Camp Nou purring. Lionel Messi scored two and set two more in a huge win, although Huesca made a valiant attempt in an exciting first half by exposing chinks in Barcelona’s defence.

Lionel Messi is in stunning shape, Luis Suarez has got off the mark this season and Philippe Coutinho is increasingly at home as the team’s midfield playmaker. Ousmane Dembele has come on leaps and bounds and the goals flew in to delight home supporters.

There are still problems with the defence and Huesca struck twice in a first half which was trickier than it should have been for Barcelona, who went in at the break only 3-2 up.

7 — Ernesto Valverde picked his strongest side and was rewarded with a spectacular victory. The coach also made his substitutions earlier than usual, taking the chance to rest Ivan Rakitic, Sergio Busquets and Samuel Umtiti when the game was obviously over thanks to their huge lead.

GK Marc-Andre ter Stegen, 6 — The German goalkeeper was left frozen to the spot on Huesca’s first goal which deflected past him from close range and didn’t stand much chance with the second either. Other than that, had little to do, but was alert whenever the ball came into his area and was quick to grab it and start attacks, one of which led to Messi’s second goal.

DF Sergi Roberto, 7 — Barcelona’s Mr. Versatile was his usual committed self, defending better on this occasion than his teammates in the backline and also combining well with Messi on the right further up the pitch. Not an outstanding display but barely put a foot wrong.

DF Gerard Pique, 6 — Was caught a little off guard for Huesca’s first goal, not marking Cucho Hernandez well, and has not hit his best form yet. In attack he was a worry for Huesca, who at one point couldn’t wrestle him off the ball as he battered his way through.

DF Samuel Umtiti, 6 — Still showing a few signs of rust from his summer holidays after winning the World Cup with France. Might have done better to stop Huesca’s second goal, with Moi Gomez beating him to the ball to set up Alex Gallar. Otherwise solid and even played a neat chipped pass to create a chance, not a skill often found in a centre-back’s toolbox.

DF Jordi Alba, 8 — The Spaniard showed Spain coach Luis Enrique what he will be missing, with his excellent attacking work unfortunately matched by some shaky defending. Alba forced Jorge Pulido to put the ball into his own net and set up Luis Suarez for the third goal. Drilled in the seventh after combining with Messi. However at the other end his lack of diligence played a part in both of Huesca’s goals.

MF Sergio Busquets, 7 — Showed the intelligence to abandon his defensive midfield position to fill in further forward when Barcelona pinned Huesca back, as well as dropping deeper than the defence at other times to help protect the team as needed. A typically understated display.

MF Ivan Rakitic, 8 — Given Barcelona’s dominance the Croatian had more freedom than in other matches and as well as marshalling the midfield found time to slam home a bending half-volley for Barcelona’s fifth goal. Earned his ovation when substituted for Arturo Vidal.

MF Philippe Coutinho, 9 — Worked his way into the game with some nice touches as his influence increased as the first half progressed. Some good interplay with teammates around the Huesca area to create space and openings, including a brilliant pass to set Messi up for the sixth goal. Missed a golden chance of his own when clean through, firing at Axel Werner.

FW Lionel Messi 10 — Bringing back memories of his strike against Bayern Munich in 2015 which sat Jerome Boateng down, Messi turned away from Luisinho to leave the Portuguese player on the floor, before rasping home the equaliser with his right (wrong) foot. Struck the crossbar with a powerful effort just after half-time, netting clinically for his second and teeing up both Rakitic and Alba for goals. A superlative display.

FW Luis Suarez, 8 — The Uruguayan will be glad to get his first goals of the season under his belt after recent criticism of his form and slow starts to previous campaigns. Finished from Alba’s cross lethally for Barcelona’s third goal and played an excellent through ball to Dembele for the Frenchman’s strike. Won and converted a stoppage-time penalty to round off the win.

FW Ousmane Dembele, 8 — Some brilliant moments but the French winger was also erratic in the first period, with heavy touches and a lack of control holding him back at times. Valverde’s job is ironing those out of his game. Took his goal well, drilling home well across the goalkeeper for Barcelona’s fourth and seemed to mature as the game went on.

DF Clement Lenglet, 6 — With the ball mainly in Huesca’s half, Lenglet had no real defensive duties to attend to. On the ball he was comfortable, something important at Barcelona given their possession based game.

MF Arturo Vidal, 6 — Didn’t have much influence after coming on for the final stages in place of Rakitic. Tried to keep the team’s tempo up with quick, short passing.

MF Arthur, N/R– Came on for Sergio Busquets and played in the pivot position without fuss. 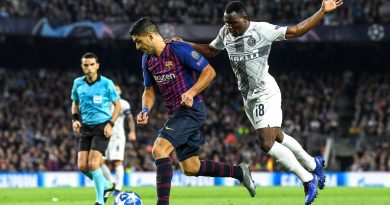 Oct 24, 2018 ayman022 Comments Off on Luis Suarez and Arthur both 8 out of 10 as Barcelona dont miss a beat without Lionel Messi 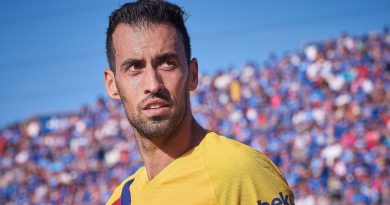