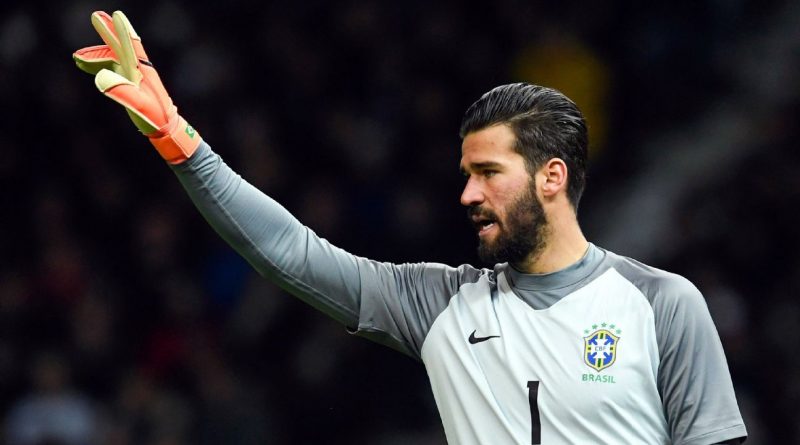 Chelsea look set to spark a goalkeeper merry-go-round after registering their interest in Roma star Alisson, the Mirror claims.

The Blues will rival Liverpool and Real Madrid for the Brazil No. 1, as Thibaut Courtois edges toward the exit with one year remaining on his contract.

Courtois would likely return to Madrid, but to which club? He featured for Atletico for three seasons on loan, but Real might be eager to upgrade. And depending where Courtois lands, it could mean that goalkeepers on the order of Atletico’s Jan Oblak and Real’s Keylor Navas suddenly become highly prized (and available) targets.

18.51 BST: Sueddeutsche in Munich writes that statements from Robert Lewandowski‘s agent claiming his client wanted to leave Bayern Munich were not coordinated with the 29-year-old. The report states that agent Pini Zahavi’s contract to represent the Poland international expires on Aug. 31, meaning this summer is his last opportunity to cash in on Lewandowski is this summer. He’s been linked with PSG, while Real Madrid reportedly is his dream move away from the Allianz Arena.

18.24 BST: It seems Manchester United have competition for the signing of Lazio midfielder Sergej Milinkovic-Savic. Calciomercato reports that Juventus are in fact the 23-year-old’s preferred destination, and that he’s informed the Roman club to prioritise a bid from the Serie A champions over United.

Gazzetta dello Sport has reported that the Bianconeri have already seen one €80m bid turned down, and that Lazio will hold out for as much as €130m. Working in Juve’s favour, however, is Lazio’s interest in the Old Lady’s 23-year-old centre-back Daniele Rugani, who could be used as a makeweight to help complete a deal.

17.57 BST: Sky Sports reports that Chelsea have ended their interest in Maurizio Sarri becoming their next manager because of concerns with the 59-year-old’s “brushes with Italy’s football authorities”. The Napoli manager received a €20,000 fine and two-match ban in January for allegedly directing homophobic slurs at Roberto Mancini.

17.30 BST: Despite speculation, sources have told ESPN FC that Javier Pastore is unaware of talks with West Ham.

17.15 BST: Sources have told ESPN FC that Manchester United and Juventus are in talks over the transfer of Matteo Darmian, though the clubs are yet to agree on a fee.

16.15 BST: Over in Spain, Real Betis had a rather unique way on announcing the transfer of Takashi Inui…

16.00 BST: Leicester City have emerged as the frontrunners for Norwich City’s James Maddison, according to Eastern Daily Press. The 22-year-old had previously been linked with Tottenham, but the Foxes appear to be the side ready to part with £22 million for the midfielder.

15.50 BST: It now appears Liverpool have entered the race for Ousmane Dembele, with Mundo Deportivo writing that Jurgen Klopp has been trying to contact the star’s mum in an attempt to bring him to Anfield.

15.40 BST: A replacement for Gianluigi Buffon? The agent of Genoa goalkeeper Mattia Perin has been spotted…

15.00 BST: Napoli midfielder Marek Hamsik has been linked with moves to China and Chelsea, but his father told Radio CRC — via Italian journalist Gianluca Di Marzio — that he expects him to honour his three-year contract.

14.45 BST: We wrote earlier about the messy situation regarding Rui Patricio asking to rescind his Sporting contract so he can complete a transfer to Wolves.

O Jogo now report that another major factor is that, with the violent scenes at the club this past month, he has feared for his life.

14.40 BST: A big story coming out of Spain. Sport say that Sven Mislintat has met with Barcelona officials to discuss the possibility of Arsenal signing Ousmane Dembele.

14.25 BST: MEN write that Manchester United want to finalise the signing of Fred from Shakthar Donetsk next week.

13.00 BST: Sources have told ESPN FC that Manchester United are interested in Gareth Bale, and are awaiting a response from Real Madrid.

12.55 BST: Christian Eriksen’s agent says that several clubs are interested in his client, but that he is focused on the World Cup and becoming a father this summer, report the Evening Standard.

12.40 BST: Gazzetta dello Sport have been speculating the future of Mario Balotelli after he left Nice.

They, rather surprisingly, rate Arsenal’s chances of signing him at “15%”, with Napoli and Borussia Dortmund the favourites.

12.35 BST: Some more stuff from the continent — Record in Portugal say that Benfica forward Anderson Talisca is waiting for a concrete offer from Liverpool.

The uncapped Brazilian has also been linked with moves to Manchester United and Wolves.

12.10 BST: Confirmation of a line we brought you earlier — Willy Boly and Benik Afobe are joining Wolves on permanent transfers.

Wolves have triggered options in the loan agreements of Willy Boly and Benik Afobe, which will see both make permanent moves to Molineux this summer.

The midfielder has been offered a new contract at the club with his current deal up this month — they report that Milan and an unnamed English club are interested.

The France international has prompted speculation after saying current Bayern and former Lyon player Corentin Tolisso has improved because of the quality of players he is playing with at the German champions.

11.05 BST: Thomas Lemar has been talking to L’Equipe regarding a proposed transfer from Monaco, with Arsenal, Chelsea, Liverpool, Tottenham, Atletico Madrid and Juventus all interested.

“The transfer market is a bit mad right now. I work, I work. We’ll see what happens when the time comes.”

West Ham close to completing deal to sign Ryan Fredericks.
Fulham contract running out this summer. Deal should be done in next few days.

West Ham close to completing deal to sign Ryan Fredericks.
Fulham contract running out this summer. Deal should be done in next few days.

10.40 BST: While one striker looks set to stay in the blue-and-black half of Milan, another could be joining the red-and-black half.

Monaco and Colombia forward Radamel Falcao has been talking to Premium Sport about the possibility of a transfer to the Rossoneri, saying it would be an “honour” to play for them.

10.30 BST: Inter’s vice-president Javier Zanetti told Sky in Italy that Mauro Icardi wants to stay with the club, while he says there is still time for them to complete the permanent transfers of Rafinha and Joao Cancelo.

10.15 BST: Sticking with Wolves, there is an intriguing story emerging in Portugal.

Record claim that Rui Patricio has ‘rescinded his contract’ with Sporting because negotiations with Nuno Espirito Santo’s side have taken a bad turn.

10.00 BST: According to Sky Sports, Wolves have signed Benik Afobe from Bournemouth for £12.5 million. We will keep an eye out for official confirmation…

09.15 BST: Monaco defender Djibril Sidibe is close to becoming Atletico Madrid’s first signing of the summer, according to reports in L’Equipe.

08.52 BST: Thomas Lemar is back on the radar of Liverpool, according to the Guardian. He would cost around £100m, so that puts Arsenal out of the race…

08.41 BST: At least one PSG youth academy product has committed his future to the club. Garissone Innocent (a goalkeeper) has signed professional terms. What a name!

08.23 BST: Juventus defender Medhi Benatia has been linked with a move to Arsenal and, according to reports in the Daily Express, he’s tempted.

Following Zinedine Zidane’s resignation as Real Madrid manager, Tottenham boss Mauricio Pochettino is the No. 1 choice as replacement say both the Mirror and the Daily Mail.

Meanwhile, Chelsea have been linked with a move for Zidane.

Sorry, Arsene, no links for you today.

Juventus will try to tempt Chelsea into selling Alvaro Morata by offering Gonzalo Higuain in a swap deal, says the London Evening Standard.

Juve see this summer as the perfect opportunity to recoup some of the £78 million they paid Napoli for the Argentinian two years ago and offload Higuain’s £125,000-per-week wages to make room for the Spaniard.

Morata enjoyed two successful seasons in Turin, scoring 27 goals from 2014-2016. Chelsea dismissed an approach to take Morata on a two-year loan, but would be willing to listen to permanent offers, though it remains unclear whether a 30-year-old Higuain, with little resale value, would appeal to the Blues.

… or is it for Inter’s Icardi?

Meanwhile, Tuttosport believes Juve are pursuing the “swap of the century,” with Inter Milan receiving Higuain and Mauro Icardi heading to Turin.

Icardi, 25, inspired the Nerazzurri to Champions League football and scored 29 goals to capture the title as Serie A’s top scorer.

But a €110m release clause could push Inter into considering the swap in order to guarantee a top-class replacement for their captain.

— Frank Lampard was named the new manager at Derby County on Thursday, and the Daily Star reports he’ll be reunited with his former Chelsea captain John Terry, who will leave Aston Villa to play another season in the Championship.

Lampard is quoted in the Express as saying, “I haven’t even had a conversation with John. That’s the truth — I got a text message off him but he’s on holiday. I’ll look at it as a big picture.” Meantime, Harry Redknapp believes his nephew should make a deal for Terry: “What a signing he’d be!” he said, according to Talksport.

— Newcastle are targeting Gian Marco Ferrari to strengthen their defence under Rafa Benitez, according to Chronicle Live. The Magpies will compete with Fulham and Sampdoria, where the 26-year-old spent last season on loan. Sampdoria have an £11.2m option to turn that loan into a permanent deal, but are currently negotiating to lower that figure.

— Chelsea defender Kurt Zouma could join Turkish side Bursaspor on loan next season to continue his development after a season with relegated Stoke, says the Mirror. Fiorentina are also keen, but the French defender likely will return for Blues’ preseason training.

— Napoli have met with Sampdoria over a proposed move for Uruguayan midfielder Lucas Torreira, according to Tuttosport. The Italian daily also claims Torino and Marseille are in talks concerning a deal that would bring Bouna Sarr to Turin, with M’Baye Niang heading in the opposite direction. 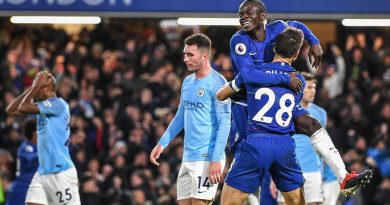 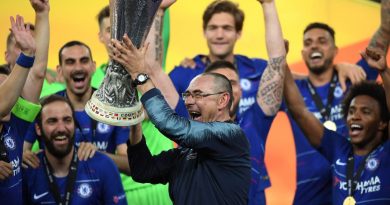 Chelsea lifting silverware amid uncertainty is a peculiar, familiar success

May 30, 2019 ayman022 Comments Off on Chelsea lifting silverware amid uncertainty is a peculiar, familiar success 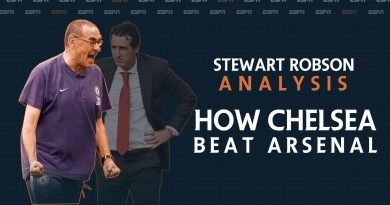 Aug 20, 2018 ayman022 Comments Off on Sarri’s Chelsea headaches after win over Arsenal