Losing a top player on a free transfer was once identified as pure mismanagement: a boardroom-level failure of planning, negotiation and foresight triggering ire among fans. Arsenal are one club to face heavy criticism in this way, so much so that in October 2018, the club’s then-newly installed director of football, Raul Sanllehi, drew a line in the sand.

“I believe that a player’s contract should never go to the last year, as a policy,” he said. “But I don’t think I am inventing the wheel. Anybody could agree on that. Normally the contracts of the players are for five years. You need to have a clear idea of what you want to do with that player when he is in the third year, at the latest.”

Despite their best intentions, Aaron Ramsey still joined Juventus for nothing the following summer after rejecting multiple contract offers to stay, and it’s indicative of a trend that’s only spread throughout the game in the intervening period.

Research by KPMG suggests that in Europe’s top five leagues, there was a 6% decrease in transfers involving a fee between 2019 and 2021, to a record low of 30%. There has also been an increase from 19% to 22% in the number of free transfers during the same time-frame. It’s perhaps a modest shift at first glance, but the majority of business in lower divisions has largely comprised of such transactions as finances are generally more precarious and clubs survive on loans or signing unattached players.

The change has now come at the top end of the game, with more high-profile free agents than ever before. Last summer’s list was star-studded: Lionel Messi, Sergio Ramos, Gianluigi Donnarumma, David Alaba, Sergio Aguero and Jerome Boateng were among the names moving. This summer is similar: Paul Pogba, Ousmane Dembele, Paulo Dybala, Antonio Rudiger, Alexandre Lacazette, Christian Eriksen, Gareth Bale and Luis Suarez are just some of those able to negotiate on their own terms.

It appeared Kylian Mbappe would lead the free transfer surge as he looked destined to join Real Madrid from Paris Saint-Germain before performing a dramatic U-turn last month. Mbappe’s new three-year contract to remain in Paris reportedly includes a €100 million signing-on fee and a €50m annual salary, remarkable evidence of the strong negotiating position elite players can have when running down their existing deals. More often that not, however, players in this situation move clubs.

So why it is happening? ESPN’s James Olley and Tor-Kristian Karlsen investigate.

Player power is (still) on the rise

There was a time when long contracts were akin to gold dust for a footballer. Earnings were relatively modest outside the elite, which meant the security of a three- or four-year contract was a genuine aspiration for many players. A serious injury could wreck a player’s life, not just his career. Injuries remain a risk today, of course, but advancements in sports science and nutrition mean players are less fearful of leaving themselves without the security of a regular income.

The biggest shift has been that their weekly wage is only one revenue stream for the top players nowadays, as image rights are arguably more lucrative with players becoming brands in their own rights. Last year, Cristiano Ronaldo became the first player to surpass 500 million followers on social media; at the time, that figure was more than all 20 Premier League clubs combined. Ronaldo is an extreme example, but there are many leading stars who possess a greater online following than the clubs they play for, and that financial clout offsets concerns about where their weekly wage is coming from while adding value to potential suitors.

Messi signed for Paris Saint-Germain on a free transfer last summer in a deal worth £25m net in wages per season, plus a £25m signing-on fee. Sources close to the club insist he has already turned a profit for the Ligue 1 champions in commercial and marketing revenue.

Pogba’s second spell at Manchester United has been largely underwhelming, but he is hugely popular on social media, a factor that will enable him to choose between a number of high-profile clubs this summer.

This sense of freedom dates back to the 1995 Bosman ruling — named after Belgian midfielder Jean-Marc Bosman — that released players from regulations and meant that clubs couldn’t stop players from leaving when their contracts had expired. Former United manager Sir Alex Ferguson said on the 20th anniversary of the ruling: “Once the European Court of Justice ruled that clubs no longer had to pay transfer fees after the expiration of a player’s contract, all hell broke loose. Suddenly it was a free-for-all.” — Olley

Squad sizes are being trimmed

Perhaps the most obvious reason for the surplus of out-of-contract players in circulation is the effect of professional clubs wanting to operate a lean squad structure. This is understandably more relevant in smaller and less-affluent leagues, but there are also signs that there’s less appetite to keep players on a decent wage who hardly get minutes — even at the highest level.

With the financial blow from the pandemic still being felt, cost-cutting measures are being implemented wherever possible, with contracts and player salaries the natural starting point. — Karlsen.

… because of the impact of the COVID-19 pandemic

Many clubs have been affected by the pandemic, but Barcelona are among the most obvious examples. Ousmane Dembele could yet sign a new deal, but Barca were keen to move the French winger on for a fee both last summer and in January to raise funds to comply with LaLiga’s spending cap as their wage bill had skyrocketed.

Similarly, Real Madrid have been keen to move on Gareth Bale for some time, yet could not find a taker for his £600,000-a-week wage. Wales‘ successful qualification for the World Cup in Qatar later this year means he’s more likely to sign a short-term contract to stay sharp, but his salary will be a fraction of what he earned in Madrid.

Juventus were reported to have agreed terms on a new deal with striker Paulo Dybala only to then seek to reduce the salary on offer, prompting his imminent free transfer with Inter Milan leading the race.

An absence of European football was one factor prompting Arsenal to trim down their squad for the second half of last season. The club took late decisions on Alexandre Lacazette and Eddie Nketiah, both in the final years of their contracts, related to what European competition they qualified for next season. However, Lacazette has now agreed terms with his former club Lyon, while Nketiah featured prominently in the run-in and is expected to sign a new deal before it expires at the end of the month.

The club have also released seven first XI players — Henrikh Mkhitaryan, Mesut Ozil, Sokratis Papastathopoulos, Shkodran Mustafi, Sead Kolasinac, Willian and Pierre-Emerick Aubameyang — before the end of their contracts in recent years, giving them a sizeable payoff to leave. Sources told ESPN that in some cases players got as much as 90% of the outstanding sum, but the decision was taken to save money in the long run, and other clubs could well follow this model. — Olley

Another clear development, which started to emerge even before the COVID-19 pandemic, is a growing reluctance among clubs (at practically any professional level) to offer contracts to “journeymen” players older than 26.

Experience is increasingly being seen as an overpriced factor and the general trend is to reserve slots for clubs’ own academy products — or even to pay substantial transfer fees for teenagers or players in their early 20s — at the expense of more established rotation players. This results in many older plyers who would be just squad players being forced to accept lower terms or face the struggle of finding a contract elsewhere. — Karlsen

The leading clubs from Russia and Ukraine have been a factor in the international transfer market for decades, with countries such as Serbia, Croatia and Czech Republic consistent beneficiaries of their transfer income. With league football in both countries practically put on hold due to the ongoing war, and with China’s recent big spending spree over too, several relatively active markets where players picked up attractive paydays have suddenly disappeared.

Though this is further down the food chain, the effects can still be felt as income (for clubs) which was previously taken for granted to trickle down is no longer available. — Karlsen

Agent fees are seen by some as a great way to earn a quick buck. FIFA’s decision to deregulate the agent industry in 2015 removed almost all barriers to entry, sparking a proliferation in both the number of “intermediaries” and families taking representations of their loved ones in-house.

Messi and Neymar have long been looked after by their fathers, but their reputations are so stratospheric that negotiations have been weighted in their favour for years. At a less stellar level, there has been a growth in family representation –including Marcus Rashford, Jesse Lingard, Declan Rice and Trent Alexander-Arnold to name but four.

Transfers are complex. Relationships with executives matter, and a high level of legal knowledge is required to ensure that a contract is optimised for all parties. A simple renegotiation to remain at a player’s current club or a free transfer are both simpler because there’s one less party to satisfy in talks. That said, an agent can earn a significant percentage of a transfer fee and so the lure to take a more difficult path to financial remuneration has obvious appeal for some. — Olley

Some individual situations feel unique this summer. Christian Eriksen spent last summer wondering what standard of life he would have after surviving a terrifying cardiac arrest while playing for Denmark at Euro 2020. Not only did he make a stunning recovery, but the 30-year-old made such an impact at Brentford that there is considerable competition for his signature. Eriksen and Brentford agreed an initial six-month contract — a completely understandable length given the uncertainty over his ability to still play at the top level — and now he looks set to continue his remarkable comeback into next season and beyond, possibly at a bigger club.

Although there were elements of more traditional contract issues regarding both Rudiger and Andreas Christensen at Chelsea, the club were hampered in their efforts to keep the pair by former owner Roman Abramovich being sanctioned by the U.K. government for alleged ties to Russia President Vladimir Putin.

A special licence granted to the Blues to continue fulfilling fixtures prevented them from entering into contract talks with any existing players. In the meantime, Rudiger agreed to join Real Madrid and Christensen accepted terms with Barcelona. — Olley 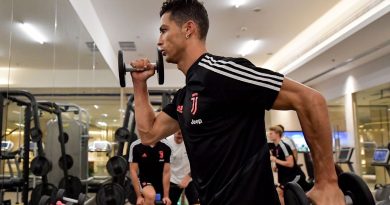 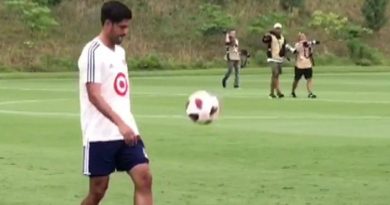 Aug 1, 2018 ayman022 Comments Off on MLS players train ahead of All-Star Game 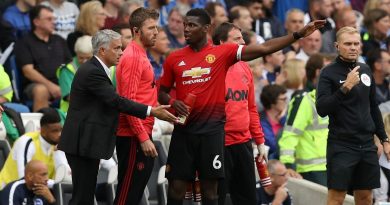