We’ve reached the nail-biting conclusion of the group stage in ESPN’s Battle of the Leagues, presented by EA Sports FIFA 22, and after bidding farewell to the four eliminated teams after the group stage — LaLiga, Eredivisie, Major League Soccer and Liga MX — we are ready for the semifinals. Mark Ogden’s Premier League take on Gab Marcotti and the Bundesliga, while Kay Murray and her Serie A All-Stars square off against the defending champions, Julien Laurens and Ligue 1.

You can catch up on the tournament rules and format here, then check out below to see the team selections, tactics and prematch chat before watching highlights of the matches and managers’ real-time reactions.

“Now that we’re into the business end of the competition with a place in the final at stake, I will of course bring my “A” game again. The Bundesliga game didn’t matter to us as we had already topped the group, but I was still happy with the team’s performance despite a last-minute defeat. However, for this huge game, I’m going back to my strongest team and tactics. We are reverting to our trademark 4-3-3 formation, and all of our key players are back.

“I have to make a big call this week between Kylian Mbappe and Lionel Messi. Considering the lack of pace in the Italian defence, I think it would be great to play Mbappe from the start with Messi able to come off the bench if needed. I don’t think this Serie A side is very good — I don’t rate their manager much either, to be fair — so if we are focused and serious, we will go through to the final. We have so much talent in our squad and plenty left to give.

“The best is definitely yet to come from us, and hopefully Serie A will push us a bit so we finally have a bit of competition in this tournament. It has been far too easy for us up to this point, but I have a lot of faith in my players and feel confident we’ll reach our second final in a row.”

“After having a settled team and formation through the group stage, it’s time to change things up against Ligue 1. We are going with a back five to try to negate the world-class attack that Ligue 1 — aka Paris Saint-Germain — has up front.

“I’m taking advantage of the depth of defensive options available to me in Serie A — what other league would be able to bring a player of Giorgio Chiellini off the bench after reaching the semifinals without him?

“But we should still be able to maintain balance throughout the side to make sure there’s enough firepower in our attack, with Paulo Dybala moving up to join Ciro Immobile in the the front two.”

Wissam Ben Yedder slams home to put Ligue 1 1-0 up vs. Serie A in the Battle of the Leagues semifinal.

“So Erling Haaland is out, and I’m OK with that. I figure it gives me a chance to play two wingers with Robert Lewandowski, supported by attacking wing-backs Raphael Guerreiro and Nordi Mukiele. That’s why I’m switching to a 3-4-3, with Matthias Ginter coming into the back three. I’m slightly uneasy because of Ginter’s pace, but I figure it’s time to take some risks.

“Axel Witsel is back in central midfield and, given that the Premier League feature two central attacking midfielders behind three strikers, I’m hoping that will give me a bit of extra experience.

“Do I miss Haaland? Yes, obviously. But I did feel like too often he and Lewandowski were getting in each other’s way and he was retreating into midfield. Hopefully this slimmed-down system will work. The Premier League’s weakest area, quite clearly, is the full-backs defensively and by playing a winger and wing-back on each side, I’m hoping to exploit that. I can’t wait to face Juls again in the final… “

“Having qualified as group winners, albeit a little unconvincingly, it’s time to make some tactical changes for the semifinal. So I’ve bolstered defensive midfield by pairing Kalvin Phillips and N’Golo Kante, and with Cristiano Ronaldo ruled out by injury, I’ve tweaked my attacking options by operating with Harry Kane as a lone striker ahead of Christian Pulisic, Kevin De Bruyne and Sadio Mane.

“With a more solid look to the team and plenty of great attacking options, I’m expecting to win against the Bundesliga.” 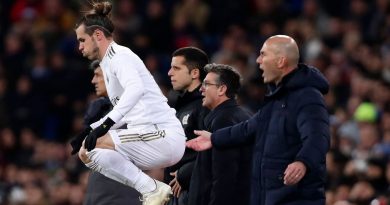 Aubameyang doubtful for Arsenal-Man United due to sick mother

Jan 28, 2021 ayman022 Comments Off on Aubameyang doubtful for Arsenal-Man United due to sick mother 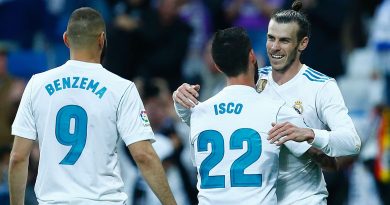