The coronavirus pandemic made the transfer market unlike any before it, but there was still plenty of action on Deadline Day. With the window closed across the major leagues in Europe, you can check out the latest major completed transfers across the globe.

Paris Saint-Germain have eyes for Cristiano Ronaldo, according to Calciomercato. There are two problems facing the French champions, however… the player doesn’t want to leave, and Juventus don’t want to let him go.

While it’s true that taking Ronaldo’s salary off the books would be advantageous for Juve, and Kylian Mbappe continuing to look likely to move away from Paris next summer, it would appear as though PSG have their work cut out to land one of Europe’s top talents.

Les Parisiens are alleged to have made contact with Juventus about Ronaldo in the summer, with the Bianconeri replying that he wasn’t available to be moved.

PSG were looking to explore the option of a cheeky bid knowing that Juve are one of many clubs hamstrung financially by the effects of COVID-19.

However, Juve continue to state that their main man is going nowhere, while Ronaldo himself appears to want to stay in Italy.

08.59 BST: Brazilian forward Robinho has signed a five-month contract with former club Santos where he will play for less than $75 a week, the Brazilian giants announced.

The 36-year-old, without a club since helping Turkish side İstanbul Basaksehir win the club’s first Super Lig title last season, now begins his third stint with Santos after signing a deal worth €271 (R$1,500) a month.

“Santos FC is going through a difficult financial time,” former Real Madrid and Manchester City player Robinho said. “So this is the time for those who can do something. I want to help the club that always gave me everything.

“Santos FC has already done a lot for me and this return is still little. I will play for a minimum wage, but the most important thing is to be here. I am well physically and mentally, obviously there is still a little bit of rhythm, but that over time we will gradually evolve.”

08.27 BST: Ryan Giggs could put him in contention for the Manchester United hotseat has strengthened his managerial credentials with Wales and a successful European Championship, former United striker Mark Hughes has said.

Giggs, 46, won 13 league titles and two Champions League crowns during a 24-year spell at United and was named the club’s player-coach towards the end of his career. He took over as interim player-manager after David Moyes was sacked and also served as an assistant to Louis van Gaal when the Dutchman was appointed in 2014.

Giggs left United after the appointment of Jose Mourinho in 2016 and secured his first managerial role with Wales two years later, guiding them to Euro 2020.

“I think Ryan is in a good place in his management career,” Hughes, who managed Giggs when he was Wales boss, told the BBC. “He is on an upward trend.

“He is probably more likely to get an opportunity at United than he was when Van Gaal left in 2016.

“Maybe they felt his management CV wasn’t strong enough at that point, but if he goes to the European Championship and does well, then there’s no reason why he won’t be in the frame.”

08.00 BST: Bayern Munich defender Jerome Boateng has yet to decide what his next move will be as he approaches a decade at the club.

Despite several ups and downs in recent years, Boateng remains an important part of Bayern’s defence under coach Hansi Flick. However, his contract is set to expire next summer, and he will turn 33 in September 2021.

Having been linked with a move to Paris Saint-Germain in 2018 and Juventus last year, Boateng had a quiet summer on the transfer front this year and became one of the few players to win the Treble twice.

“In the end, I am delighted to still be at FC Bayern,” Boateng told kicker, not ruling out signing a new deal at the club. “I can imagine that. It’s a lot of fun with Hansi Flick as a coach and this squad.”

But his time at Bayern will eventually come to an end one day, and he told kicker that he could consider moving to MLS once this happens.

“Another culture,” he said when asked about what could thrill him after Bayern. “I like to get to know something new and must not always be at the same place. USA, Asia or maybe another European country. We’ll see about that.”

After reporting on Sunday that Juventus were hoping to secure the signature of Bayern Munich defender David Alaba in January, three other clubs also like the prospect of adding his experience to their ranks in the next transfer window, and have seemingly joined the race for his services.

According to German platform Sport1, Chelsea, Barcelona and Real Madrid could battle it out alongside the Bianconeri for the Austrian’s expertise.

Chelsea have had an expensive summer transfer window but know they still need to add further protection to their back line, while Barca and Real would both be interested in gaining a wealth of experience without having to pay an astronomical transfer fee.

Alaba’s contract ends in the summer and so is free to talk to other clubs in January, which has several clubs salivating. The 28-year old appears unwilling to commit to a new contract with the German champions, and so he could make another club very happy, should he decide for a change of scenery next year.

Ozil not keen on Saudi move

Saudi Arabian side Al Nassr have bid £5m for Arsenal‘s Mesut Ozil, but the German is not keen on a move to the Middle East.

This is according to Argentine TV channel TyC Sports, who are reporting that though the Asian club have offered Ozil a two-year deal, he is keen to stay and fight for his place at the Emirates Stadium instead.

Ozil has been frozen out at Arsenal and hasn’t played for the Gunners since March 7, with Mikel Arteta making it pretty clear that the 31-year-old doesn’t play a huge part in his plans.

Ozil has been left out of Arteta’s 25-man Europa League squad and with just nine months left on his £350,000-a-week contract, Arsenal would most likely want to recoup some money on their investment before he leaves on a free next summer.

– Tuttomercatoweb believe Tottenham Hotspur and Everton are the most likely clubs to land the signature of Napoli striker Arkadiusz Milik. Both clubs were among a host of sides around Europe looking to land the forward to no avail in the last transfer window. Milik has since been left out of Napoli’s squad for the rest of the season, which has boosted hopes of any would-be suitors looking to prise him away from San Paolo Stadium when the next transfer window opens.

– Newcastle United boss Steve Bruce is believed to be interested in having a bit of a clear out at St James’s Park and one of the players likely to be packing his bags in the new year is Christian Atsu, according to the Northern Echo. Atsu, who has been told he doesn’t figure in the Magpies’ plans this season, has interested both Watford and Nottingham Forest in the Championship, but both clubs want Newcastle to continue to pay part of his salary. 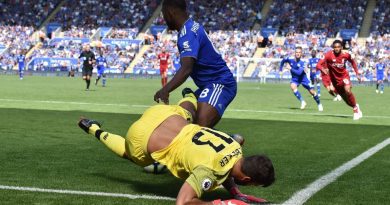 Sep 2, 2018 ayman022 Comments Off on Alisson lands a 5/10 for error Andrew Robertson excels in Leicester win 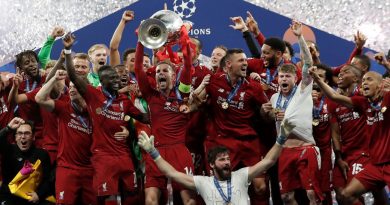 Champions League will be won by Man City, Liverpool or Barcelona. Sorry, everyone else

Sep 16, 2019 ayman022 Comments Off on Champions League will be won by Man City, Liverpool or Barcelona. Sorry, everyone else