Zinedine Zidane says his future as Real Madrid coach does not depend on winning the Champions League for the third successive season.
The Frenchman has enjoyed plenty of European success in the Spanish capital but has come under pressure this campaign following a poor LaLiga title defence.
Real, who saw bitter rivals Barcelona take their domestic crown on Sunday, are well placed to lift the Champions League trophy for the fourth time in five years and take a 2-1 lead into Tuesday’s semi-final second leg at home to Bayern Munich.
Zidane insisted he was fully focused on the clash with the Bundesliga champions but dismissed suggestions that failing to win the competition would determine his fate.
“It’s independent of that,” the 45-year-old told realmadrid.com.
“Today I’m the coach and I want to continue at this club.
“But it’s not important. What matters to everyone is thinking about tomorrow’s game and that’s it.”
Goals from Marcelo and Marco Asensio earned Real’s narrow comeback victory at the Allianz Arena last week after they had fallen behind to a strike from Joshua Kimmich.
The crucial away goals mean Bayern must score at least twice at the Bernabeu to have a chance of progressing to the final in Kiev.
Despite holding the upper hand, Zidane has urged his players to start with an attacking mentality and increase their lead in the early stages.
“The key for us is to go out to win the game,” he said. “No need to take chances, to play on the back foot, nor to do anything strange.
“We’ve got to go out and get an early goal.
“It’s a semi-final and we know the importance of the game. We know what we have to do.”
Speaking about the potential of reaching a third final in a row and setting up a meeting with Roma or Liverpool, Zidane added: “The only thing we’re thinking about is going out and giving everything to make it to the final.
“It’s what drives us all on, the fans, the club, the team want to give everything to get to the final.”
Defender Nacho should be available having returned to training following injury, but play-maker Isco and full-back Dani Carvajal are doubts after sustaining problems last Wednesday in Bavaria.
Bayern boss Jupp Heynckes has defended top-scorer Robert Lewandowski following his lack of Champions League goals.
Poland striker Lewandowski has registered 39 times in all competitions this season but failed to find the net in his last four European games, including last week’s first-leg defeat.
Heynckes, a striker during his playing days, has backed his star forward to rediscover top form.
“Lewy has my complete support. Every striker, including myself, has phases where they don’t score,” said Heynckes at his pre-match press conference.
“But he has scored a lot of goals this season and you can’t forget that he once scored four goals against Real in the semi-final of the Champions League for Dortmund.
“So who knows what’ll happen tomorrow.”
Bayern’s cause is not helped by injuries to key players Arjen Robben and Jerome Boateng.
The pair were forced off with problems during the initial meeting with Real and will be unavailable, although Javi Martinez and David Alaba, who have also had injury problems, have travelled.
The German club have a poor recent record against the LaLiga side, losing six in a row, including last season’s two-legged quarter-final.
Heynckes, however, is unconcerned about that statistic and called for his players to be more clinical after they wasted a number of opportunities last week.
“The past isn’t important,” he said.
“We have to be more efficient than in the first leg. We’ve scored goals all season and I hope we’ll see that clinicalness tomorrow that’s been a mark of our game all year.
“We attacked in Munich and only conceded two because of mistakes by our players. It had nothing to do with being open or a lack of organisation.
“It could come down to little things tomorrow, so players need to remain alert and limit any possible mistakes.
“We want to do things differently from the first leg – which includes scoring.” 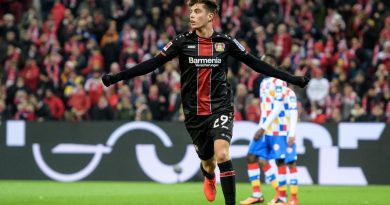