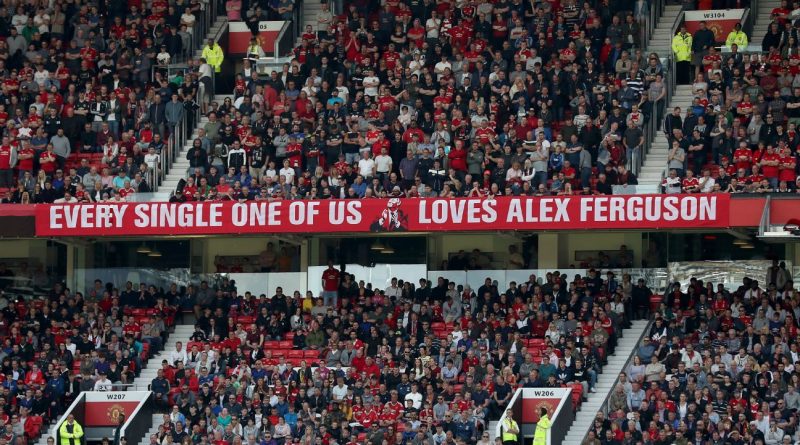 MANCHESTER, England — Three hours before kickoff, vendors staked out little pieces of concrete in front of Old Trafford, doing steady business selling scarves that honored various Man United figures past and present. A fan walked up and asked for two of Sir Alex Ferguson, who remains a powerful presence around the club despite being five seasons and four managers removed from the touchline. That presence has been especially poignant during the past eight days, fueled by the first real fear of his permanent absence. Last Saturday, Ferguson was rushed to the hospital for emergency brain surgery to repair a hemorrhage.

He remains hospitalized but is awake and asking about United.

Sunday was the last game of the season at Old Trafford, played on a beautiful afternoon with a little breeze and the temperature in the high 50s. Fans poured into the streets surrounding the stadium, stopping to pick up cheeseburgers and bacon rolls to eat while they walked. Game day around Old Trafford creates one of the most magical feelings in sports, the rare experience to surpass the hype. The hours passed quickly. Pints of bitter and longnecks of lager. Styrofoam boxes of chips. Soon it was time.

The stadium DJ played the usual hits: The Pogues, Herman’s Hermits, a version of John Denver’s “Country Roads” with the words changed to be about United. The players took the field. The fans crowded into the terraces. Ferguson was on their minds. It sounds crazy unless you grew up a Manchester United fan, but it has been demoralizing this past week to realize that Sir Alex won’t live forever. Supporters unfurled a new banner in the Stretford End honoring Ferguson, and seconds before kickoff, the fans began singing the words on that banner, chill bumps spreading around Old Trafford. This was the first home game since he entered the hospital.

“Every single one of us,” they chanted over and over, “loves Alex Ferguson.”

Sir Alex Ferguson is 76. He was born in a blue-collar, union stronghold of Glasgow the year after the Battle of Britain. That time and place has shaped nearly everything about him. So many of his traits now admired around the world — his steely resolve, his aggression, his plain-spoken ease — began in a world trying to stand up after surviving the apocalypse. His father worked in the Glasgow shipyards, helping to build many ships, including an oil-burning freighter named the Queensland Star. For some reason, that name always stuck with Ferguson, the idea of raw iron fashioned into something powerful and beautiful. It looked sleek and immortal at anchor.

When Ferguson came of age, he got a job in a factory, too. That’s where he might have worked forever if not for his talent with a ball at his feet and for his ambitious, curious mind. As a young man, he went from saloon to saloon, raising money for striking workers, and when he got rich and famous, he remained a solid left-winger, the most important parts of him still connected to the streets of Glasgow. He wrote about his homeland and its people in his autobiography: “When they leave Scotland it tends to be for one reason only. To be successful. Scots don’t leave to escape the past. They move away to better themselves.”

Even after he’d been knighted, he remained that boy who grew up around the docks. Not long ago, locals playing trivia in a Glasgow bar saw someone join the game and enter the name “Sir Alex.” They looked around, gob-smacked to find the actual Sir Alex grinning and holding his own with the questions. He’s a voracious reader. He’s obsessed with the Kennedy assassination. He loved to sing Sinatra around the Man United office. People close to the club tell stories about how he’d walk the academy’s practice field and stop and talk to a reserve goalkeeper and remember the names of everyone in the player’s family. The unspoken subtext is that the current regime can’t do that, and if the Sir Alex stories have some larger point, it’s that Ferguson created a family out of a billion-dollar business using mainly his unrelenting will.

It’s hard to know what’s real and what is nostalgia. Each story is a brick in a monument, built slowly over time. At some point, it doesn’t even matter what’s real and what’s imagined. An idea can be immortal, a fact Ferguson clearly understands. The Queensland Star sailed the world for decades until, in 1979, it made one final voyage from the south of England to a scrapyard in the south of Taiwan, where big torches and winches undid the work of Ferguson’s father and his friends. But the idea of those men in that Glasgow shipyard outlived the vessel they built. When Ferguson started buying racehorses, he named the first one Queensland Star.

For the fans of Man United, Sir Alex Ferguson isn’t just the name of a man, but code for the dominant team he created in his image, one they long to see again.

It has been a frustrating season at Old Trafford. While there is an FA Cup final against Chelsea to come next weekend, the team finished second in the Premier League, behind crosstown rivals Man City. Second is good for any fan base except one that expects not just victory, but dominance. Manchester United fans want to see opponents tremble like they did when Ferguson tapped his watch. His teams did more than win titles. In memory, they swarmed the goal, hurling themselves against a defense, bringing pressure and power and speed to bear. That’s not how the current team plays. Of course, that’s not how Ferguson’s teams always played, either, but they did have something ineffable. There are growing complaints about the style of the current manager, Jose Mourinho, which feel like a way of expressing this nagging suspicion that the intimidation the club once carried around the world came from Sir Alex. With each passing year, it’s harder to ignore the fact that some essential part of the club’s treasured myth left Old Trafford with him, and someone like him is necessary to bring it back.

Mourinho, then, isn’t competing with a mere man. He’s competing with someone who is being canonized right in front of him. Objectively, he’s doing a good job in a football world more complicated than the one Ferguson left behind in 2013. The comparisons don’t seem fair, and yet they aren’t going anywhere. There’s an interesting story in the current issue of 8×8 Magazine that talks about the innate human need to saint some men while tossing others aside, so a perfect culture can survive the imperfect people who try to sustain it. Ferguson’s sudden and serious illness, followed by his fight to overcome it, has captivated Man United fans at the exact time they are measuring Mourinho against the ghosts of Old Trafford. Sitting in a restaurant a half-mile from the stadium on Sunday, waiting to head to the game, a group of Mancunians joked that Ferguson could check out of the hospital tomorrow and do a better job than Mourinho. When I bade them farewell, they made a crack on the team’s boring style of play and told me, “Don’t fall asleep.”

When it’s functioning properly, Old Trafford is a machine that creates and preserves the club’s mythology. Outside the stadium, there is a clock set on the time the team plane crashed in Munich 60 years ago. Next to the new Alex Ferguson banner is one that says, “Feb. 6, 1958 … The Flowers of Manchester.”

Before kickoff on Sunday, the team brought out members of the 1968 European Cup-winning team, and the crowd applauded loudly. The old men stood on the green grass with their white hair and blue blazers. One of them wiped his eyes. Another lingered on the pitch as the others disappeared from view. Part of what makes Manchester United dominant are these ghosts, and part of what makes the club different is its ability to add new ones. Fans still wear George Best jerseys. They will wear Sir Alex scarves 50 years from now. Old Trafford always seems to sense and celebrate the shifting and passing of generations.

Sunday was no different.

When the game ended, a plodding 1-0 victory over Watford, the crowd stayed and waited for retiring team captain Michael Carrick to return to the pitch for a final goodbye. When he did, bringing his two children with him, the fans rose to their feet and chanted and sang, and he smiled and waved. Someone produced a microphone, and Carrick thanked the crowd for making Old Trafford such a wonderful place to play. Then he got to the end of his speech.

“When I talk about family,” he said, “it’s been a tough week for everyone.”

The crowd roared, drowning him out for a moment, chanting once more. “Every single one of us … loves Alex Ferguson.”

Sir Alex is recovering, and all the positive energy being poured on him and his family can’t be hurting that recovery. He will get better, but the past eight days have forced Man United fans to face a world without him. That’s an unavoidable truth. Each day brings closer the time when he’ll fully and finally transition from a man to a myth. He’ll live forever in the stands of Old Trafford, which on Sunday sang about their love. It was wild to have been there and seen it in real time. Carrick looked up at the swaying mass of red. He offered his thoughts and prayers for Sir Alex, and those of the people gathered around him. He imagined his old coach in front of a screen.

A senior writer for ESPN.com and ESPN The Magazine, Wright Thompson is a native of Clarksdale, Mississippi. 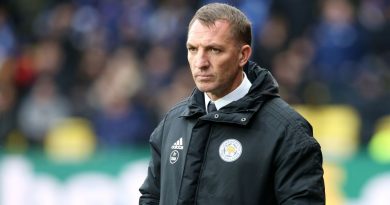 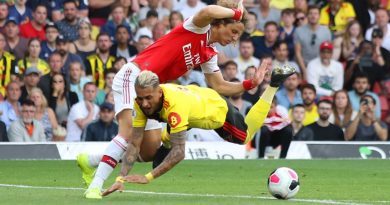 Arsenal slump to draw at Watford thanks to 5/10 David Luiz, Matteo Guendouzi

Sep 15, 2019 ayman022 Comments Off on Arsenal slump to draw at Watford thanks to 5/10 David Luiz, Matteo Guendouzi 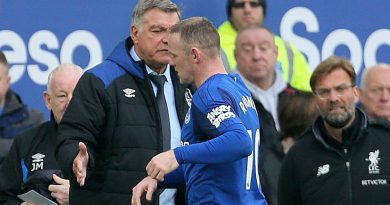 Apr 20, 2018 ayman022 Comments Off on Everton’s Wayne Rooney: ‘No issue’ with Sam Allardyce over Liverpool substitution