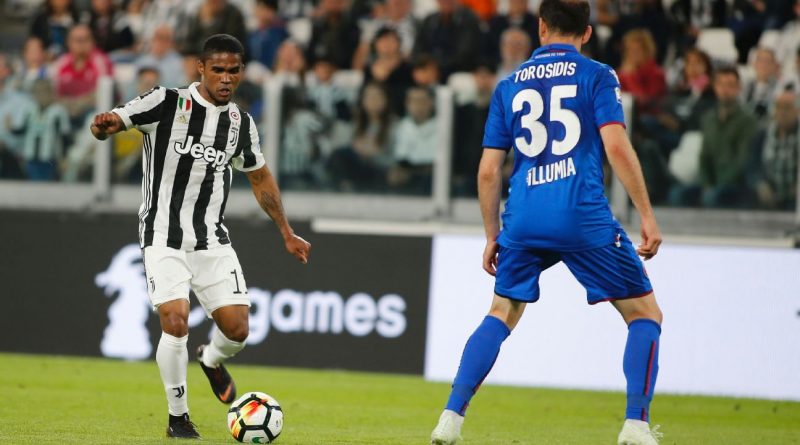 Dramatic Juventus needed a great second half to produce the comeback and defeat Bologna 3-1 to earn another victory in the quest for a seventh-straight league title.

Juventus started with determination, but individual errors allowed Bologna to win a penalty they converted. The Bianconeri struggled to reply, void of intensity, ideas and individual brilliance to cause real trouble.

Douglas Costa’s arrival on the pitch in the second half inspired better play from the team as he ran and passed again and again to create a multitude of chances for his teammates. However, it was Sebastien De Maio’s own goal that got Juve back to level terms before Sami Khedira and Paulo Dybala made the most of Costa’s work to secure a goal each and a win that takes them one step closer to the title.

Douglas Costa is the hero Juventus have needed to bail them out of tricky situations this season. His pace, ability to take players on, growing understanding of Juve’s patterns of play and ability to prove decisive has earned him rave reviews and the affections of all at the club.

Without Costa, the team look rather ordinary going forward, void of ideas. This version of Juve continues to make life difficult for themselves with poor errors, forcing reactions in practically every match. This summer will require huge investments to recreate the solidity the club once boasted.

6 — Massimiliano Allegri’s starting XI wasn’t exactly ideal but he made the changes necessary to ensure an excellent second half. This isn’t the greatest Juve and they have struggled at the end of the season on a physical level but he’s still securing the performances he needs to fight for the trophies.

GK, Gianluigi Buffon, 6 — Terrible pass to Daniele Rugani who conceded the penalty. Terrible on Simone Verdi’s penalty. Thankfully he made up for it with a great save on Emil Krafth and a good one on Mattia Destro.

DF Juan Cuadrado, 7 — The position he played hinders his ability to express himself perfectly, but he exploited gaps well, contributed to impressive attacking plays and delivered key passes. He was also the man who delivered the pass from which De Maio scored on his own goal. Turning into a good team player when he once used to make relentlessly poor decisions.

DF Daniele Rugani 5 — Impresses when he’s stubborn about winning the ball. Conceded the penalty that Bologna scored from but Buffon was more at fault than he was. Unfortunately, the player just doesn’t offer defensive guarantees, especially alongside Barzagli. Too panicked, reactive, inexperienced.

DF Kwadwo Asamoah, 6 — He works so hard to adapt to the circumstances and despite a few mistakes, always tried to offer his contribution in both phases of the game.

MF Sami Khedira, 7 — His run forced the own goal as Di Maio tried to clear but scored the own goal instead and he scored to make it 2-1. Excellent runs and good understanding of the gaps. Delivered efficiency and intelligence all over, as usual.

MF Claudio Marchisio, 6 — It took him only six minutes to launch the perfect ball forward for Gonzalo Higuain who drew an excellent save from Antonio Mirante but he produced little thereafter.

MF Blaise Matuidi, 5 — Rather ordinary on the day until he was substituted, as he often got in the way of his teammates.

FW Paulo Dybala, 6 — Good delivery from set pieces but he squandered a great opportunity by waiting too long to execute. As for his goal, he really wanted it and finished it off perfectly. Not really one who delivers the creativity or interesting patterns of play anymore, but still scored.

FW Alex Sandro, 6 — He’s not good in a more advanced role, continuously seeking to force movements rather than rely on quick and accurate deliveries into the box. Still needs to better his movements if he wishes to be regarded as versatile. Better in his defensive duties.

FW Gonzalo Higuain, 5 — Not his game today. He tried to make some good runs but he squandered a good chance and looked a little muddled. His movement in the final third was still good though and he never gives up.

FW Douglas Costa, 9 — Brilliant, just brilliant. He registered two assists, but he should have had more had his teammates converted their chances. His pace and accuracy changed the game, as he took on opponents before delivery brilliance. The rabona got Juve’s directors off their feet to applaud.

DF Stephan Lichtsteiner, N/R — Came on to deliver defensive guarantees and he fulfilled his duties. He will be missed next season.

FW Federico Bernardeschi, N/R — Not on for very long but still good touches 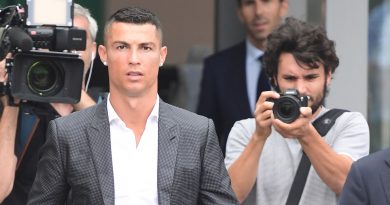 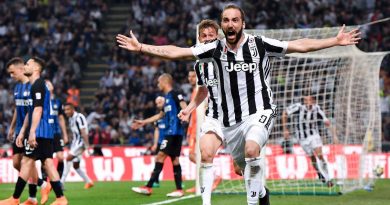 May 4, 2018 ayman022 Comments Off on Juventus’ late comeback win at Inter heaps the pressure back on Napoli 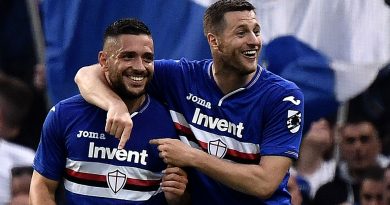 May 26, 2019 ayman022 Comments Off on Sampdoria defeat Ronaldo-less Juve on final day