Currently second in the Women’s Super League, Manchester United have only surrendered three points this season and finally look settled under manager, Marc Skinner, who took over last season. But despite their standing, things haven’t been handed to them on a platter and have been earned in 90-minute increments.

After all, this is a team that for years languished under the poor support of leaders who seemingly forgot Man United had a women’s team at all. That is changing, but even so, there are still on-field problems that haven’t been eradicated from last season and beyond. And yet, Man United keep finding a way to get results nonetheless — so, just how far can they take it?

Given where they are now, what are United’s chances of a coveted top-three finish on the table, or even securing a first Super League title?

Just three short matches ago, Manchester United were having their weaknesses exposed by reigning WSL champions, Chelsea. Against a team built with world class players, the Red Devils seemingly had neither the experience nor that last few percent that takes a team from very good to world beaters.

Yet when the team from the red side of Manchester travelled to London for their next league outing two weeks later, they looked a side renewed and refocused against the Gunners. Indeed, Man United appeared unwilling to let themselves be overrun by the crushing experience of an Arsenal team that won a first domestic title 26 years before United founded the full-time in-house women’s team that plays today.

United have been far from faultless this season, and the vulnerability of previous campaigns remains. They’ve shown similar errors to ones made in their three previous seasons in the WSL — the mistakes that took them from possible title contenders to participation trophy winners, unable to finish higher than fourth.

Yet after their loss to Chelsea, when it looked like they were about to spend another season toiling only to finish just shy of the Champions League placings reserved for the top-three finishers on the table, the Red Devils stepped up and put in a commanding first half performance against an Arsenal team not at their best.

The criticism of United at the Emirates was their lack of clinical finish that could have easily seen all three points slip from their grasp. Indeed, from a winning position, United then found themselves chasing late in the game, only to score two late goals — one in stoppage time — and shock the team who had been leading the league.

Again, finding themselves with two weeks between games, United showed their best when they finally returned to action against Aston Villa at Old Trafford on Saturday. The performance an utterly dominant one, it only improved after half-time tweaks that kept Villa further from the ball, allowing United to settle in a relaxed pattern of pulling and pushing the Villainesses across the turf to carve out goal-scoring opportunities.

The result was Man United’s most comprehensive win yet of this WSL campaign, a 5-0 thrashing over Aston Villa with goals from five different players. Skinner admitted he wasn’t expecting so many of his players to have opened their account for the season so early — although we are reaching the half-way point of the campaign.

In fact, ten of the 13 players who’ve started for Man United in league play this season have found the back of the net at least once with the only exceptions, goalkeeper Mary Earps, defender Maria Thorisdottir and midfielder Lucy Staniforth. Factoring in goals off of the bench, a total of 12 United players of the 19 who’ve featured in the WSL have scored so far this season, which, even now, is a clear improvement on last season.

As Skinner said on Saturday: “It’s about moving the opponent, last season we faced too many blocks and they [United] just sat in front of them and they couldn’t find ways of overcoming that block but now we can play direct if we need to, we can get behind you…”

The manager also cited the six draws his team were involved in over the previous campaign, conceding that people might have been sat wondering just where the goals were going to come from in this go-round. But this season, he said, it’s not just about being able to rely on more players to contribute goals but about the different ways his team can manipulate the teams they face. He pointed to United’s third goal against Villa as the quintessential display of what has changed — “the movement, the play, the composure, the manipulation of the opponent: that’s what we want as a group,” he said.

For United, it’s not just on the pitch that things are looking up but off of it too. Following more than a light rumble about conditions not being up to muster during former manager Casey Stoney’s time, that factored into the former England captain’s decision to leave. The appointment in October of Polly Bancroft as the club’s first head of women’s football highlights not just the positive steps United are taking to improve things for their women’s team, but also shines a light on their previous failings for the club to get to this point without such a role despite it being an FA requirement.

With things looking so grim at United that players were even considering going on strike just a year and a half ago, it’s again critical to contextualise just how far the team have come in a short space of time under Skinner, with the former Orlando Pride and Birmingham City coach taking the reigns after Stoney’s departure, ahead of the 2021-22 season. Further still, it’s paramount to remember that this incarnation of United Women has only existed for 4 ½ years.

The sentiment after their defeat to Chelsea was that the Red Devils need time — time to grow to make the mistakes that they’ll learn from to keep improving both on and off the pitch. Things don’t come to you overnight in football, regardless of gender, but already we can see just how the pieces are falling into place with this team under Skinner. Even though we’re just talking about a change of manager, Stoney had been the one to build the squad from scratch ahead of the 2018-19 season, she had worked to grow that team organically and let them learn from their strengths as the only full-time team in the Championship.

Coach, manager, analyst and everything in between during that first season, the team were very much Casey Stoney’s Manchester United rather than just Manchester United. So, when she departed to start from the ground up with San Diego Wave in the American NWSL, United were losing not just a coach or manager but a key part of their own foundation as a team.

Although Skinner has greater resources to call upon and a stronger support staff, he’s found himself in a pair of gargantuan boots that Stoney left behind. Yet, as has been seen in the league so far this season, he is indeed filling them out and finding the best way for his Manchester United to be and play.

After their narrow win over a defensively stubborn Leicester City team, Skinner said, “We’re not always going to perform brilliantly” — the message was intended for the fans who expect a certain degree from a team that bares the United crest. And indeed, it’s fair to have lofty standards but no team is impervious to ugly wins, to the wheezing, crawling-over-the-finish-line matches of attrition — not least for a team who are, on paper, nowhere near as stacked as the three teams who’ve finished above them in each of the last three seasons.

Yet when you bring their last two matches into view, there is great promise in the team but there is no worry of arrogance from the team who currently sit second in the WSL table, three points adrift of leaders Chelsea, albeit with a game in hand. When asked by ESPN about not getting ahead of themselves, Skinner had this to say:

“First and foremost, it helps if you’ve got good people because they’re very honest but secondly it’s like… you’ve done nothing, no disrespect but we’ve done nothing. We have to earn everything: that’s my character, I think your character as a coach, you impart that onto your team. One of our values when we look it as a group, a collective, we give more than we take, it’s a principal of ours.”

A former teacher, there is something reassuringly nurturing about Skinner, who typically fills his post-match comments with praise for his players but as the coach points out, so much of how his squad functions comes from his own character. So, there is not the worry that the players will lose their grounding despite the increased interest since the Euros or their own standing in the table.

In his previous employment with the Pride, the players instantly came out to praise their coach with US veteran defender Ali Krieger even going as far as to say, “Marc is the best coach I’ve had in my career and I have that feeling that I want to win for not only us and myself and the team, but for him and the coaching staff.”

Becky Thompson and Sophie Lawson reveal the forward lines of their WSL all star teams.

Skinner remained a Marmite character with fans during his time in Orlando, with the team perpetually struggling to find form and, in his short time in Manchester, the manager is as divisive when it comes to the United fans. Yet he is again clearly well-liked among the players and he understands, as he did in his last spell in the WSL at Birmingham City, how to get the best from the players he has at his disposal. The biggest gripe that, much like England boss, Sarina Wiegman, Skinner has a preferred starting XI and those on the fringes look doomed to warm the bench.

We have, however, seen the manager rotate his squad for league cup games: the area United have struggled the most this season, posting two draws that became shootout losses from their two fixtures so far this season. Although it’s no surprise that players who’ve been without substantial minutes would be coming into their cup starts cold and unable to rely on undeveloped partnerships.

Yet if United are to push into the top three in England and take their first fledgling steps in the Champions League next season, rotation and thoughtful player management will be key in not falling out of step with their league as well as European commitments. Although that is a conversation for another time.

For now, United look to be going from strength to strength, having finally found their footing under Skinner. However, with rotation likely for their league cup clash with Everton tomorrow ahead of a stern test at the Etihad against noisy City neighbours, the coach will have to find the right balance, not least facing a Manchester City team full of confidence on an eight-match winning run.

The dream of finishing top of the table looks as achievable as it ever has for Man United — yet they know they will not be allowed many slip ups, either against Man City or against Chelsea and Arsenal later in the year. 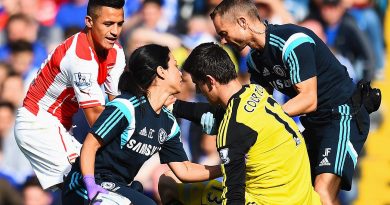 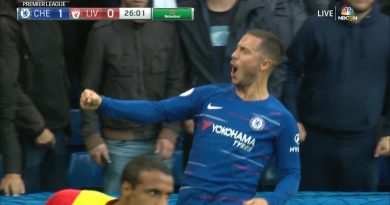 Hazard puts Chelsea ahead of Liverpool

Sep 29, 2018 ayman022 Comments Off on Hazard puts Chelsea ahead of Liverpool