Arsenal ran rampant against north London rivals Tottenham Hotspur to secure a 4-0 victory in front of a record-breaking attendance of 47,367 in the Women’s Super League (WSL) on Saturday.

Spurs, in their fourth season in the WSL, can be considered relative newcomers in the top-tier and Arsenal demonstrated the level needed to compete at the top of the table with an untroubled display.

Signs of a difficult afternoon for Rehanne Skinner’s Spurs appeared immediately when Beth Mead‘s deflected effort trickled just wide early on, and it was a sign of things to come as Mead opened the scoring two minutes later.

Vivianne Miedema extended Arsenal’s lead shortly before half-time while Rafaelle added a third and Miedema put further daylight between the two sides with her second goal in an onslaught after the break.

Arsenal boss Jonas Eidevall made three changes to the side which drew 2-2 with Ajax on Tuesday, dropping Stina Blackstenius, who had scored twice in as many games, to the bench alongside Lina Hurtig and Noelle Maritz.

Mead, riding the momentum of her impressive European Championship campaign, was not to be denied, however, and within five minutes she found the opening goal.

Her probing ball in was blocked by Molly Bartrip, but the ball came back out to the Arsenal forward, who curled in a fantastic finish at the second time of asking to score her third goal of the season.

Arsenal had the measure of Spurs in the opening exchanges and forced numerous openings with crosses flashed into the box, often exposing the visitors in the wide areas through Katie McCabe and early goalscorer Mead.

Manuela Zinsberger wasn’t called into action until the 38th minute, when she produced a routine stop in response to a tame strike by Celin Bizet.

And the hosts’ endeavour was rewarded two minutes before the end of the first half as Miedema scored her first goal of the 2022-23 campaign.

Caitlin Foord dispossessed Evelina Summanen and the ball deflected into the path of the clinical Miedema, who raced through on goal and dispatched a cool finish past Rebecca Spencer.

The half-time interval didn’t halt Arsenal’s momentum and they inflicted more misery on Spurs nine minutes after the break, as Rafaelle headed a thumping effort past Spencer from Mead’s pinpoint corner.

In a frantic spell of pressure, Eidevall’s side reaped further rewards, with Miedema notching a brace. The Netherlands forward had been kept quiet in Arsenal’s opening two matches of the season, but Spurs couldn’t subdue her as she nodded in the hosts’ fourth goal from a quickly-taken corner in the 68th minute.

The hosts continued to push forward but Skinner’s side managed to stop the flow of goals.

Arsenal had worked themselves into a comfortable position to see the game out and earn their second 4-0 win in as many WSL matches this season.

Eidevall’s side sit at the top of the table going into Sunday’s round of fixtures. 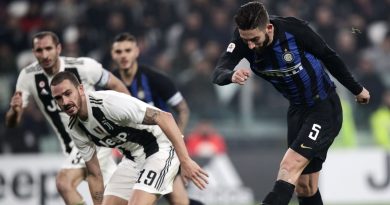 Dec 8, 2018 ayman022 Comments Off on Inter miss their golden chance in Juventus loss