Bayern Munich striker Robert Lewandowski is eyeing a move to Real Madrid with the German club looking to find a replacement in the summer window.

Lewandowski, 32, dreams of playing for Los Blancos, according to Spanish outlet AS. His contract at Bayern runs out in 2023 and the club are concerned that he will ask to leave next year when a transfer fee will be reduced.

Lewandowski scored 41 goals in the Bundesliga last season, breaking Gerd Muller’s record of 40 goals in a league season to show how prolific he remains. The Poland international also scored twice for his country at Euro 2020 this summer despite the team crashing out in the group stage with one point.

Bayern are looking to take action to replace the forward, reportedly eyeing a move for 22-year-old Cody Gakpo from PSV Eindhoven. Despite Gakpo playing mainly as a winger, new boss Julian Nagelsmann could utilise him as a false No. 9 in a similar way he utilised Dani Olmo at RB Leipzig.

Gakpo received a first Netherlands cap at Euro 2020, making an appearance off the bench against North Macedonia. On the domestic stage, he’s made 65 Eredivisie appearances with 29 goal involvements.

14.57 BST: Arsenal have been closing on Lyon midfielder Houssem Aouar but they could miss out… to rivals Tottenham.

Le10 Sport says that Spurs are now on Aouar’s trail, as well as that of Lille star Renato Sanches, who has also been linked with the Gunners.

14.30 BST: Which players could earn themselves a big move this summer after impressing at Euro 2020? Tor-Kristian Karlsen examines.

13.56 BST: Marca says that AC Milan are looking at James Rodriguez and Isco in their search to replace Hakan Calhanoglu.

Calhanoglu, 27, moved on a free transfer to join rivals Inter and has left a gap in creative midfield to fill.

Real Madrid are set to allow Isco to depart this summer, while Everton may require more persuasion over Rodriguez given his excellent form last season.

13.21 BST: Former Liverpool, Chelsea and Man City striker Daniel Sturridge is set to train with La Liga side Mallorca, the club has announced.

The 31-year-old former England international is a free agent after leaving Turkish club Trabzonspor in 2020.

12.35 BST: AC Milan goalkeeper Gianluigi Donnarumma will arrive in Paris on Wednesday to sign a five-year contract and complete his free transfer, according to RMC Sport.

Donnarumma, 22, was named the player of the tournament at Euro 2020. However, PSG keeper Keylor Navas is likely to stay at the club when the Italy No. 1 joins, sources have told ESPN.

PSG had not planned to recruit a goalkeeper this summer, preferring to remain with Navas, but the opportunity to sign Donnarumma on a free agent deal was considered too good to turn down. Though Navas is expected to start the campaign as the first-choice goalkeeper.

12.31 BST: PSG have announced the signing of France U17 defender Lenny Manisa, who arrives for around €400,000 from Ligue 2 side EA Guingamp.

The 17-year-old has signed a three-year contract until June 2024.

Matthews, 27, most recently played for Sunderland, but has been on the books at Norwich City, Doncaster Rovers, Plymouth Argyle and Bolton Wanderers.

He told Palace TV: “I can’t wait to get started. I’m excited to work with Dean Kiely again because he helps me improve, and I’ve got two great goalkeepers to look up to in Vicente Guaita and Jack Butland. It’s great to be a part of it, and I’m really looking forward to it.”

Real Madrid president Florentino Perez branded Iker Casillas and Raul Gonzalez the “biggest frauds” in the club’s history in an audio recording from 2006 that was leaked on Tuesday.

Perez, who returned as Real Madrid president in 2009, was speaking after leaving the role for the first time, a decision he said in the leaked audio was partly down to Raul.

Casillas and Raul both left the club during Perez’s second tenure but have since returned following their retirement as players. Casillas works for the Real Madrid Foundation and Raul is the coach of the B team, Castilla.

“He is not good enough to be the goalkeeper for Real Madrid, what do you want me to say?” Perez says of Casillas in the audio, which first appeared in El Confidencial. “He is not. And he never has been.

“It is the big mistake we made. What has happened is that [broken audio] they adore him, they want to speak with him… I don’t know. They defend him so much. But, well, he is one of the big frauds of Madrid. The second is Raul. The two biggest frauds at Madrid are first Raul and then Casillas.

“[Zinedine] Zidane’s a great guy. And [David] Beckham and Ronaldo… But then there are the others that think that… let’s see. Raul is a bad person. He thinks Madrid is his and he uses everything there is in Madrid, developing everything for his own benefit. Him and his agent. They are to blame for Madrid not doing well.

“Look, I left, among other reasons, because of him. Because he, now he considers his time ending, says: ‘Before I go, I am going to end Madrid.’ He is a negative guy, he is destroying Madrid and the morale of the players so that people say: ‘It’s because Madrid are bad, not Raul.’ It’s terrible how bad this guy is.”

10.24 BST: Everton left-back Thierry Small reportedly wants to move away from the club this summer, with Bayern Munich, Man United and Arsenal keen on him.

The Athletic reports that the 16-year-old hasn’t returned to Everton training and has been “absent for the full first week under new manager Rafa Benitez.”

Everton want to hand Small a new contract when he turns 17 on Aug. 1, but the club’s youngest-ever first-team player is keen to depart.

09.45 BST: Jadon Sancho will complete a medical ahead of his €85m move to Manchester United before he heads off on holiday, says The Sun.

Sancho, 20, is set to move from Borussia Dortmund to United this summer but the England winger needs a break after playing for his country at Euro 2020.

Sancho is expected to be part of Ole Gunnar Solskjaer’s squad in time for the start of the Premier League season on Aug. 14.

It brings to an end a transfer saga that has gone on for nearly 18 months. Sancho was Solskjaer’s top transfer target last summer, and although Sancho expressed his desire to move, United could not agree a fee, with Borussia Dortmund holding out for €120m. Negotiations between the two clubs have progressed more quickly this time around.

09.35 BST: Norwich City have confirmed the signing of Nice midfielder Pierre Lees-Melou on a three-year contract for an undisclosed fee.

Lees-Melou, 28, has 150 Ligue 1 appearances to his name, as well as experience in the Europa League and Champions League. He scored five goals in 33 appearances in all competitions last season.

“I’m very excited to join Norwich City and discover my new future with the club and its fans. I can’t wait to play football in Norwich colours,” he told the club website. “I spoke with Daniel [Farke] and Stuart [Webber]. We had a very long conversation about football and the vision for the team. I’ve heard a lot about how Norwich plays football in the right manner and style and also the club’s spirit and mentality. I love that and that got me very excited.

“I also spoke with Morgan Schneiderlin and Yoann Barbet about football in England. They spoke very highly of Norwich and the club’s position and standing. I appreciate the opportunity in this club and wanted to get the move sorted and start quickly. I’m excited to discover a new country, language and play in the biggest league in the world.”

Saliba, 20, was signed for €30m from Saint-Etienne in 2019 but hasn’t played for the club — instead he’s been sent on loan twice and is now set to join Marseille.

The Frenchman hasn’t yet completed the paperwork, but it seems he’ll be headed back to London again next year.

08.48 BST: Real Sociedad have signed Australia goalkeeper Mat Ryan from Premier League side Brighton and Hove Albion on a two-year deal, includes an option for a one-year extension, the Spanish club has confirmed.

After four years at Brighton, 29-year-old Ryan returns to La Liga, having had a three-year stint at Valencia from 2015-17.

He had one season remaining on his contract with Brighton and was loaned to Arsenal midway through last season after losing his spot to Brighton keeper Robert Sanchez.

Atletico said De Paul joined the club on a five-year contract. He had been with Italian club Udinese since 2016.

De Paul started for Argentina in the Copa America final against Brazil on Saturday, with Argentina winning 1-0.

“I’ll be joining the Spanish league champion and I know that it is a big responsibility,” he said. “It’s a big step in my career.”

Gab & Juls explain why there’s almost no chance of a side taking Antoine Griezmann off Barcelona’s hands.

– Manchester City have no interest in signing Barcelona forward Antoine Griezmann, according to the Manchester Evening News. The 30-year-old has been linked with a move to the Etihad side in recent weeks as Pep Guardiola looks for a replacement for Sergio Aguero. Barcelona are in a financial crisis and are in need of reducing the wage bill, with Griezmann linked to a move away. However, City have told the Catalan club they don’t want to sign the France star.

– Manchester United are close to agreeing personal terms with Real Madrid defender Raphael Varane. The Manchester Evening News reports that the 28-year-old is continuing to make progress over a move to Old Trafford, with the hope that a deal will be concluded in the next few weeks. The defender is currently on holiday with a preference on moving straight to Manchester instead of joining up with Madrid for pre-season. The France international only has a year left on his deal, meaning that Madrid are likely to move the centre-back on rather than let him go for free.

– Wolverhampton Wanderers are set to sign Fehevar right-back Bendeguz Bolla, according to Fabrizio Romano. The 21-year-old was in the Hungary squad at Euro 2020 and is seen as a prospect for the future. Now, it seems an agreement is in place between Wolves and Fehevar. New Wolves boss Bruno Lage has already made some new signings for his squad, including bringing in winger Francisco Trincao from Barcelona on loan.

– AS Roma are looking to sign Manchester United left-back Alex Telles on loan this summer, reports Calciomercato. With Italy star Leonardo Spinazzola out of the lineup after rupturing his Achilles tendon at Euro 2020, new Roma manager Jose Mourinho is on the lookout for a first-team solution. Telles, 28, has seen little game time at Old Trafford due to the resurgence of Luke Shaw, starting just seven games. A permanent deal is very unlikely but a loan is possible.

– Leicester City have set their sights on Club America defender Sebastian Caceres, according to Football Insider. The 21-year-old is valued at £20m and has been seen as a rising star in Liga MX. The Uruguay under-23 international has made 15 appearances in Mexico’s top tier since joining Las Aguilas in January 2020. 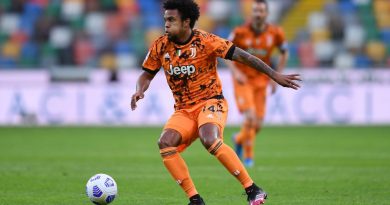 May 9, 2021 ayman022 Comments Off on USMNT’s McKennie more ‘professional’ since joining Juventus 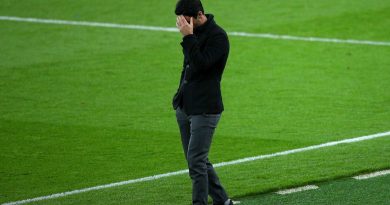 I know reason for club’s decline but can’t say