Cristiano Ronaldo has said he is “not closing the count just yet” after becoming the all-time men’s international top scorer.

The Portugal captain headed two late goals to give Portugal a 2-1 comeback victory over the Republic of Ireland in Wednesday’s World Cup qualifier to take his international tally to 111.

“Thanks to all my teammates and opponents for making this journey so unforgettable,” Ronaldo wrote on Instagram.

– Ogden: Ronaldo reminds world no one does it better
– How Ronaldo broke goal record, plus every record he has
– World Cup 2022 qualifying: How it works

“Let’s keep meeting inside the pitch in the years to come! I’m not closing the count just yet.”

His first goal of the night allowed the Manchester United forward to surpass Ali Daei’s record of 109 goals.

“Ali Daei has set the standards at such a high level, that at some point even I started thinking that I might never catch him,” Ronaldo wrote.

“Congratulations to the ‘Shariar’ for holding the record for so long and thanks for always showing so much respect for me every time I scored and as I became closer and closer to his outstanding number.”

Ronaldo, who made his senior debut in 2003, scored his first international goal at the 2004 European Championship.

“From all the records that I have broken during my career — and fortunately there have been a few — this one is very special for me and it’s certainly on the shelf of the achievements that make me truly proud,” he added.

“Scoring 111 goals for Portugal means 111 moments like the ones we experienced today in Algarve, moments of worldwide union and happiness for millions and millions of Portuguese citizens all around the globe.”

Ronaldo earned his 180th cap for Portugal on Wednesday, bringing him level with Paris Saint-Germain‘s Spanish defender Sergio Ramos as the European man with the most appearances for his national side.

Prior to the encounter at the Algarve stadium, Ronaldo, 36, was presented with the the Golden Boot award after finishing as Euro 2020’s leading scorer.

“This achievement rewards an outstanding career of almost two decades representing your country at the highest level, which speaks of your tremendous commitment and dedication to your art and your incredible passion for football,” Infantino said.

“In the process of breaking the record for the number of goals in men’s international football, you have become not only a national hero but an international icon and a role model for aspiring players all around the world. Your skills and consistent drive for improvement deserves global acclaim and admiration. Parabens, Cristiano!”

Ronaldo, meanwhile, admitted he got carried away with emotion during Wednesday’s game.

The veteran forward was booked during his goal celebrations and will miss Tuesday’s World Cup qualifier at Azerbaijan through suspension.

“I forgot [that he was booked before in qualifying],” Ronaldo said. “It’s the emotion of the game. Maybe the coach will give me a hard time, but it doesn’t matter. The important thing was to help the team. I’m sorry, but the emotions speak louder.”

Ronaldo, who re-joined United following a €23 million transfer deal from Juventus before the transfer window closed, could return to England sooner than expected.

Portugal take on Qatar in Hungary in Saturday’s friendly before travelling to Baku to face Azerbaijan.

“From the time that he is out of action and having 24 players available, it makes no sense to have him with us,” Portugal coach Fernando Santos said of Ronaldo.

“We will talk to him and decide. It means taking a player in this condition [being suspended] and have him travel three hours here and there in just a few days.

“I understand his reaction from a human standpoint. It was an emotionally charged game and in the last few minutes he scored two goals to give us the win.”

Ronaldo, meanwhile, said he is eager to start his second stint at United, where he scored 84 goals in 196 Premier League appearances for the club before leaving for Real Madrid in 2009.

“I’m very happy to return home, to go back to a club that always cared for me,” he said after Wednesday’s game.

“I still have a few years left in my career and I still want to shine and to return to the best football right now which is the Premier League.” 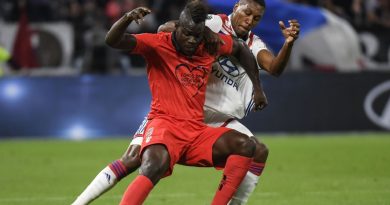 Sep 13, 2018 ayman022 Comments Off on Mario Balotelli has a lot of work to do on fitness – Nice boss Patrick Vieira 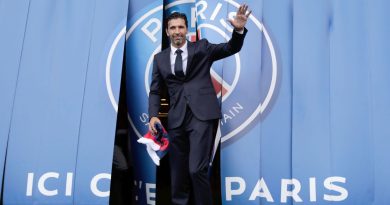 Jul 11, 2018 ayman022 Comments Off on Gianluigi Buffon ‘is not suited to PSG’ – former goalkeeper Bernard Lama