The history and tradition of Brazilian football loves finals.

Among the old guard there is still resistance to the concept of a league system, introduced just over a decade and a half ago. Those fans miss the drama of the old-style decider.

But, apart from the economic advantages, the league format has another argument in its favour. Finals may be dramatic but they can often be disappointing. There is so much at stake that no one wants to take the risks necessary to create a memorable spectacle. But in league play, every point dropped can be costly. There is more onus on teams to look for victory rather than avoid defeat.

All of this was highlighted in the penultimate round of the Brazilian Championship. It was a meeting of the two sides in the race to win the title. Internacional of Porto Alegre, hunting their first league title since 1979, topped the table, a point ahead of defending champions Flamengo of Rio de Janeiro. This meant that Flamengo had to win, as a draw would essentially be a defeat since Inter would preserve their lead going into Thursday’s final round. Meanwhile, an Inter win would decide the destiny of the title. The game could not possibly be dull.

Inter’s star right-back Rodinei is on loan from Flamengo and the terms of the loan agreement meant that he could only face Flamengo if Inter paid a fee of one million Brazilian reais (around $186,000). The club were unlikely to pay it, but a wealthy fan stumped up the cash, and Rodinei took the field.

The gods of football were unlikely to let this go quietly. Rodinei was in for an eventful afternoon. An early penalty put his side ahead, but he was at fault just before the half-hour mark when Flamengo equalised. He dived in on winger Bruno Henrique, who got past him and pulled back for Uruguayan playmaker Giorgian De Arrascaeta to roll a subtle finish inside the far post for the equaliser.

Just before half-time Rodinei came very close to restoring Inter’s lead, breaking into the area to fire off a shot which, with a slight deflection, cannoned back off the post. But it was just after the break that he was involved in the key moment of the game.

Rodinei went into a tackle with Flamengo left-back Filipe Luis. He was late and stamped down on the heel of his opponent and Filipe Luis went down in great pain. It was a clear foul, but there was no great controversy about the incident — until VAR got involved. The referee was called over to have a look at the evidence — and Rodinei was sent off.

It was a classic moment for those who are suspicious of VAR. In slow motion, the tackle looked bad. At actual speed, Rodinei was only fractionally late and there seemed to be not the slightest malice in his tackle.

The red card was surely harsh — on Internacional and on the spectacle — because it was hard to see how the leaders could hold out for almost a full half against a side with Flamengo’s firepower. Their gameplan had been based on sitting deep and launching counters. At 11v11, it had been a fascinating, pulsating clash of styles. With 11v10, it became a case of when not if Flamengo would be able to score their second. It came some 15 minutes later when the excellent De Arrascaeta slipped striker Gabriel ‘Gabigol’ Barbosa in to score on the turn and win the game.

It is Flamengo, then, who now lead the table. They have a two-point advantage going into Thursday’s final round — which means that the drama is only beginning.

Flamengo are away to Sao Paulo, who dumped them out of the domestic cup and thumped them in the league back in November. And Flamengo may well need to win. If they draw they will be overtaken if Inter win at home to Corinthians. The teams will be level on points, and with the same number of victories (which in Brazil is the first criteria used to break the deadlock) but Inter will have the better goal difference.

Flamengo need to win, Internacional must win. Thursday night should see the league system at its best — with hopefully no more VAR controversy when the final whistle is blown. 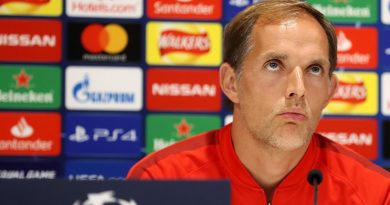 Tuchel denies he must win Champions League with PSG

Sep 18, 2018 ayman022 Comments Off on Tuchel denies he must win Champions League with PSG