DOHA, Qatar — In the winter of 2010, Tim Ream received what he called “the Petke test.” Ream was in his first professional preseason training camp with the New York Red Bulls, and then-teammate Mike Petke decided he was going to test the mettle of the rookie defender. From a dead sprint, Petke went right through the back of Ream with a slide tackle.

Ream’s response spoke volumes about the kind of player he was then and would continue to be throughout his career. He looked at Petke, stood up, didn’t say a word and got on with the training session.

“He was testing me first and foremost, but what am I going to do about it?” Ream said during an exclusive interview with ESPN. “I’m going to try to beat him a different way because that wasn’t the way I played, and wasn’t the way that I knew to get the guy back.”

Such a reaction is entirely in keeping with Ream’s personality, one that radiates a calmness in all aspects of his life.

“I don’t know that I’ve ever, ever really lost my cool,” he said. “There’s no point in retaliating or seeing red and getting angry because then your whole kind of [mindset], just everything shifts and you lose focus on what you need to do, and that’s just continuing to play the game, and then trying to win.”

It is that composure — not only emotionally, but also on the ball — that has come to epitomize Ream’s revival with the United States men’s national team during this World Cup. He has gone from being on the outside looking in, as it related to the US roster, to being indispensable. In two games with the Americans, the center-back from St. Louis has been one of the team’s MVPs. Ream has been his usual steady self on the ball, completing 89.1% of his passing and winning 60% of his duels, all while committing just one foul.

There is also Ream’s leadership. On the second-youngest team at the World Cup, the 35-year-old is the wise old head, although it earns him grief on occasion. Earlier this month, US captain Tyler Adams called Ream the “grandpa” of the group, leading to some good-natured banter on the team bus. Following Friday’s 0-0 draw with England, all of those aspects will be needed again come Tuesday, when the US face Iran with progression to the knockout rounds on the line. His teammates are grateful for his presence.

“The standard that [Ream] has been at, it’s been amazing,” said Antonee Robinson, Ream’s teammate and fellow defender at both international level and at club side Fulham. “He’s such a calming presence on the ball. It’s no shock to me. I’ve played with him for a long-enough time now to know what he’s all about. But to see him actually come out on this stage, when it was at one point looking like he wouldn’t be here, and raise his level even more than he has done already this season, it means a lot to me.”

It’s an approach that Ream has honed ever since he began playing soccer with famed youth club St. Louis Scott Gallagher. It was there that technical ability was encouraged and valued, which raises the old question: Did his environment mold him, or is that just who he is?

“I think it’s exactly within his DNA,” said Dan Donigan, who coached Ream at Saint Louis University. “I think it is his personality. He’s a very mild-mannered, soft-spoken guy. Nothing rattles him. He never overreacts to anything, on or off the field. He’s just a very composed individual no matter what he’s dealing with.”

Ream is more of the opinion that both nature and nurture — at least in a soccer sense — shaped him. He has four younger siblings, and he says, “They’re all a whole heck of a lot louder than I am. I don’t know if that’s a first child thing because my oldest is the same way. I’m not one of those guys that’s going to be the most vocal in a crowd. But with the ball, that was taught from a young age and, something that our coach really believed in.”

Ream’s steady demeanor and ability have served him well in a pro career that has now spanned 14 professional seasons. This is, after all, a man who in his past five campaigns has been on teams that were either relegated from or promoted to the Premier League. He also endured another relegation with Bolton Wanderers when he first went over to England.

“The first thing that comes to mind is it’s humbling,” he said of the yo-yo nature of Fulham’s recent years. “This game can give you so many incredible things and incredible moments and experiences. At the same time, it can take those away and then pull the rug out very quickly.”

Ream’s international experiences have been a roller coaster ride as well, just drawn out over a longer period. He was first brought into the national team frame under Bob Bradley in 2010, but some uneven play at the 2011 Gold Cup saw him drift out of the side. He earned a recall during the 2018 World Cup cycle under Jurgen Klinsmann, but once again fell out of favor. Ream was then brought into provide a veteran presence during the first year of Gregg Berhalter’s tenure, and the same thing happened. Not even a mistake-free performance against El Salvador in the first World Cup qualifier was enough to garner a bigger role, as the US manager soon turned his attention to younger players.

But Berhalter, forever hedging his bets, maintained communication with Ream during this period, although the conversations took on a familiar pattern. It seemed like every time the US manager called Ream, he had to explain to the defender why he wasn’t getting called in.

“The disappointment just kept coming each and every camp,” said Ream, adding that at one point he had “made peace” with the prospect of missing out on the World Cup.

But Berhalter’s continued communication paid off. Miles Robinson tore an Achilles in May, while Chris Richards picked up a hamstring injury in September. All of a sudden, there was an opening on the World Cup roster, and Ream was needed.

Herculez Gomez and Sebastian Salazar debate the biggest storylines and break down the best highlights that soccer in the Americas has to offer. Stream on ESPN+ (U.S. only)

Berhalter rang Ream up in early November to check on the player’s mental state, and see if he was still engaged. Ream was wary, lest disappointment smack him in the face again, but he hung up the phone thinking he had a chance to make the World Cup squad. As it turned out, these were significantly better than Lloyd Christmas odds, and Ream eventually got the word that he had made the team.

“I still was still trying to process it until we landed in Qatar,” he said.

But if the exchange with Berhalter included some tense moments, that was nothing compared to the conversation he had to have with this three children, Aidan, Theo and Lilia. Just three days before talking to Berhalter, Ream had booked a 10-day vacation to Disney World with his family. When Ream’s plans for the month of November changed, he had to break the tough news to them that the trip to Disney would have to wait.

“I explained to them, ‘What are your hopes? What are your dreams? Like, you have dreams, what do you want to do? Well, Daddy got a phone call, I am going to go to a World Cup, and we’re going to have to postpone Disney,'” he said.

It helped that his two boys are already huge soccer fans, collecting the stickers that accompany the World Cup. That helped soften the blow.

Herculez Gomez praises the United States’ performance in their 0-0 draw with England at the FIFA World Cup.

“It was a hard sell at first, probably the first hour,” he said. “Then once they wrapped their head around it, I think they were more excited to come here and see the spectacle and be involved in it now. They were asking for a week when they were getting on a plane and when they can get here.”

Ream is fully aware of his good fortune in terms of making the roster, but rightly notes that he wouldn’t be in Qatar if he hadn’t been playing well for Fulham, where his form in the Premier League this season has been outstanding. That counts as only slightly less surprising than his play at the World Cup. When Ream was last in the Premier League two seasons ago, he made only seven league appearances and seemed to struggle at that level.

What changed? When asked, a rueful smile creased Ream’s face, and he said, “I’ve seen this debate.” He goes on to insist that he’s basically the same player he’s always been. Neither his style nor his overall ability have changed.

“Do I think I’m a better player now? Yes,” he said. “Do I think I do things differently or have miraculously become a different type of player? No, I don’t think that.”

Ream admits some evolution has taken place. The arrival of manager Marco Silva “was probably the best thing to happen to me.” Fulham are a much better balanced side this season than they were during their more recent forays in the Premier League, and are solidly in ninth place at the moment. Experience counts, too. Ream noted that he’s never stopped learning, and that he’s seeing the game better, recognizing opponents’ patterns of play and reacting accordingly. But rather than creating tension, the realization that he’s nearing the end of his career has been liberating, so much so that he thinks he can keep playing for another three or four years.

“I think it’s freed my mind to then just play the game on autopilot, just like I would when I was younger,” he said.

The uptick in his play is clear, as is the gratification he’s getting from being given this opportunity on a worldwide stage. Following the Wales game, the positive vibes began to show through Ream’s usually placid facade.

“I enjoyed it immensely and it’s something I wish would’ve happened a long time ago,” he said about that match. “But I’m enjoying every single minute of playing and being here.”

Now Ream and the US face an immense challenge in taking on an Iran side brimming with confidence and momentum, and one likely to be backed by a hyper-partisan, pro-Iran crowd. Not that Ream is going to change his approach.

“I treat every single game as a knockout game,” he said. “Every single game is important and that one is the most important at the minute. I’m not going to build it up [that] this game is on a pedestal because then you start to overthink it. We know what has to be done. Win, we’re in.”

Ream’s play can help them get there. 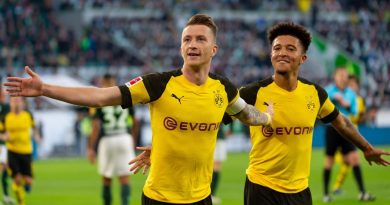 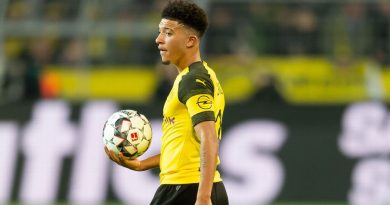 Feb 8, 2019 ayman022 Comments Off on Sancho inspired to join Dortmund by Pulisic success 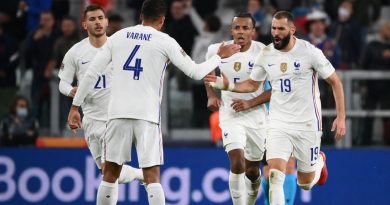