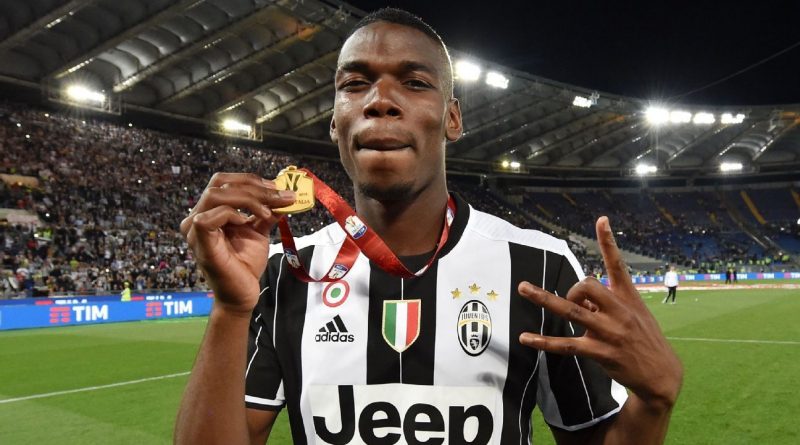 Paul Pogba is back at Juventus. The France midfielder left Manchester United on a free transfer this summer, just six years after his then-world-record £89.3 million move, and has returned to Turin to kickstart his career.

At 29, Pogba is at the peak of his powers, but came in for criticism during his time in the Premier League for a number of reasons.

Back in 2012, a 19-year-old Pogba left United’s academy because of a lack of chances in the first-team under Sir Alex Ferguson and headed to Juventus. He enjoyed a successful four-year stint in Turin, winning four consecutive league titles and two Coppa Italia trophies, but was soon back at Old Trafford in 2016.

The first version of #Pogback saw him develop his skills further — and win a World Cup with France in 2018 — but he was only able to add the EFL Cup and Europa League trophy in 2016-17 to his trophy cabinet and seemed to struggle as United failed to find a worthy successor to Ferguson.

Frequently linked with a move to Real Madrid, PSG or back to Juve, Pogba’s relationship with the fans deteriorated and it was no great surprise when he saw down his contract to become a free agent this summer. Now ready for a second shot at Juve, he will also be reunited with manager Massimiliano Allegri as the club look to win their first Serie A title since 2020.

But how different was his game in Italy to that in England?

– Transfer grades: Juve get A+, Man United an F for Pogba
– Stream ESPN FC Daily on ESPN+ (U.S. only)
– Don’t have ESPN? Get instant access

Pogba at Juventus in Serie A

Pogba has already lifted the lid on the positional freedom he felt during his first spell in Turin.

“It’s true that at Juve it was different from Manchester United,” he told L’Equipe a year ago. “We were already playing with three midfielders [at Juventus], in 5-3-2. I had the freedom, I had to be in the box, to attack. It was an obligation. In Manchester, I have the freedom to go into the box, but the priority is to play and defend.”

Clearly, he was able to make more of an impact down the left side of midfield — a position he also favours for France — and wasn’t required to do so much on the right side of the pitch. 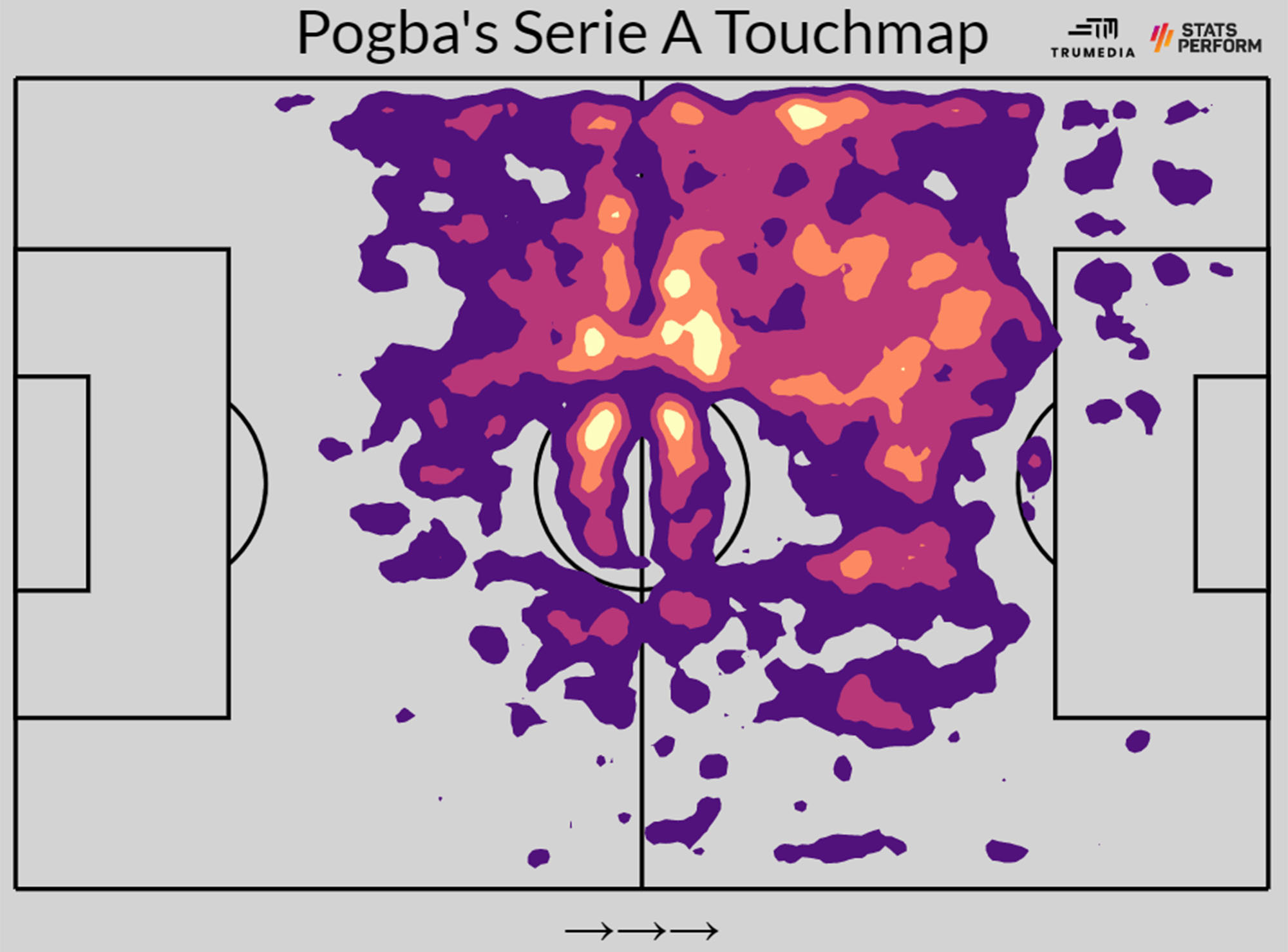 That freedom is also suggested in Pogba’s ability to shoot from distance at Juve. Clearly he felt more able to have a go from outside the box, and he was more than capable of finding the back of the net too. 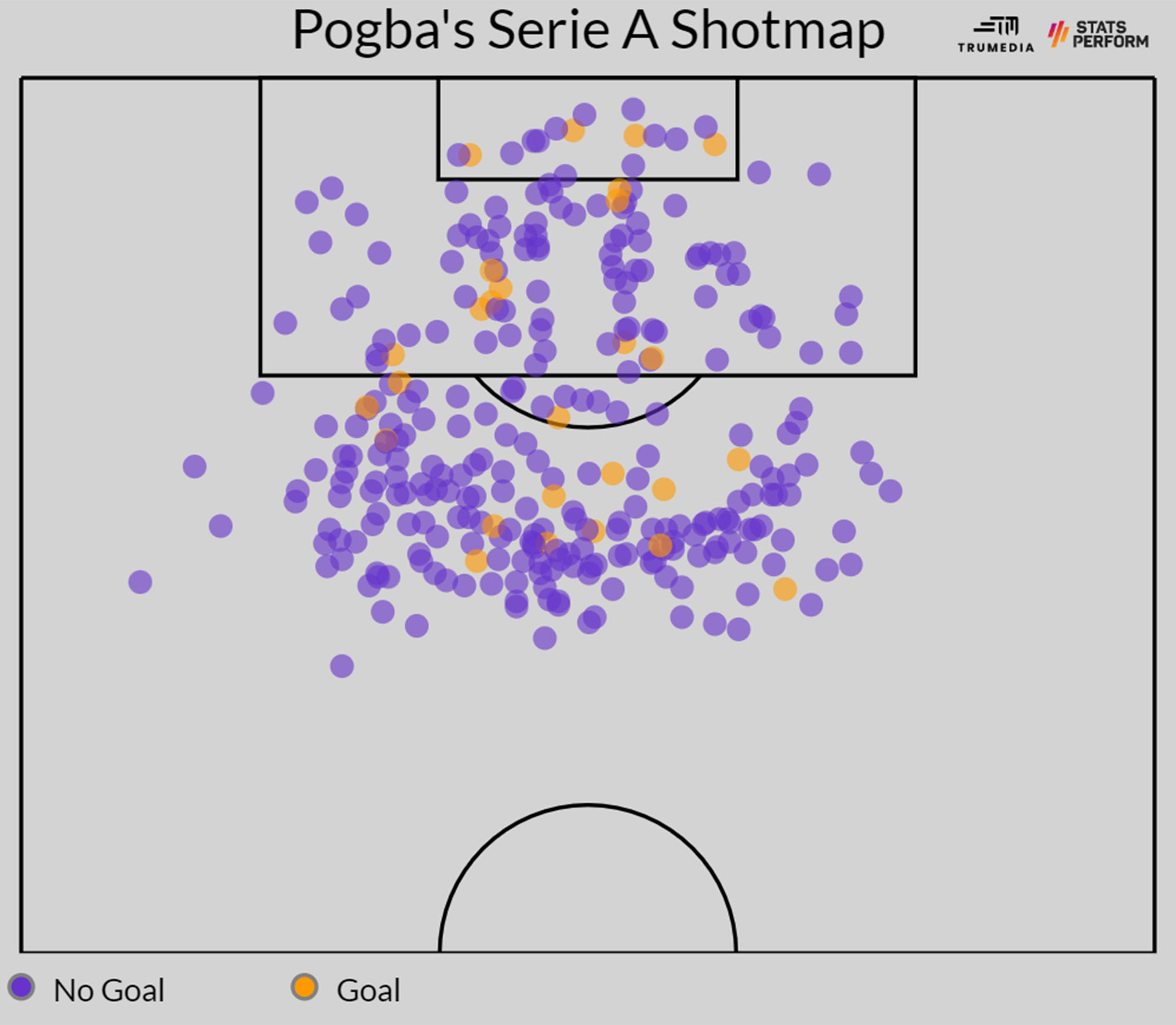 At United, the touchmap clearly shows how much Pogba was dragged around the pitch, especially onto the right side.

Under Jose Mourinho, he was used initially in a holding midfield role and said in 2016: “I try to adapt. I am a player who would rather go forward. The coach gave me instructions, I try to follow them. I have to retrieve balls and make defensive efforts. It cost me a bit to play differently, much like [ex-teammate Andrea] Pirlo. I have to play, be there to recover and play more for the team.”

Then under Ole Gunnar Solskjaer, Pogba found a modicum of success as a winger, with Fred and Scott McTominay used in the central areas, before returning to a midfield role again.

What’s clear is that he was expected to play deeper at United than he did at Juve. But, ironically, his tackle percentage was much better in Turin and the one year he did truly shine at Old Trafford (2018-19) with 13 goals and nine assists, his touchmap was similar to his time in Italy, with much of the action on the left side of central midfield. 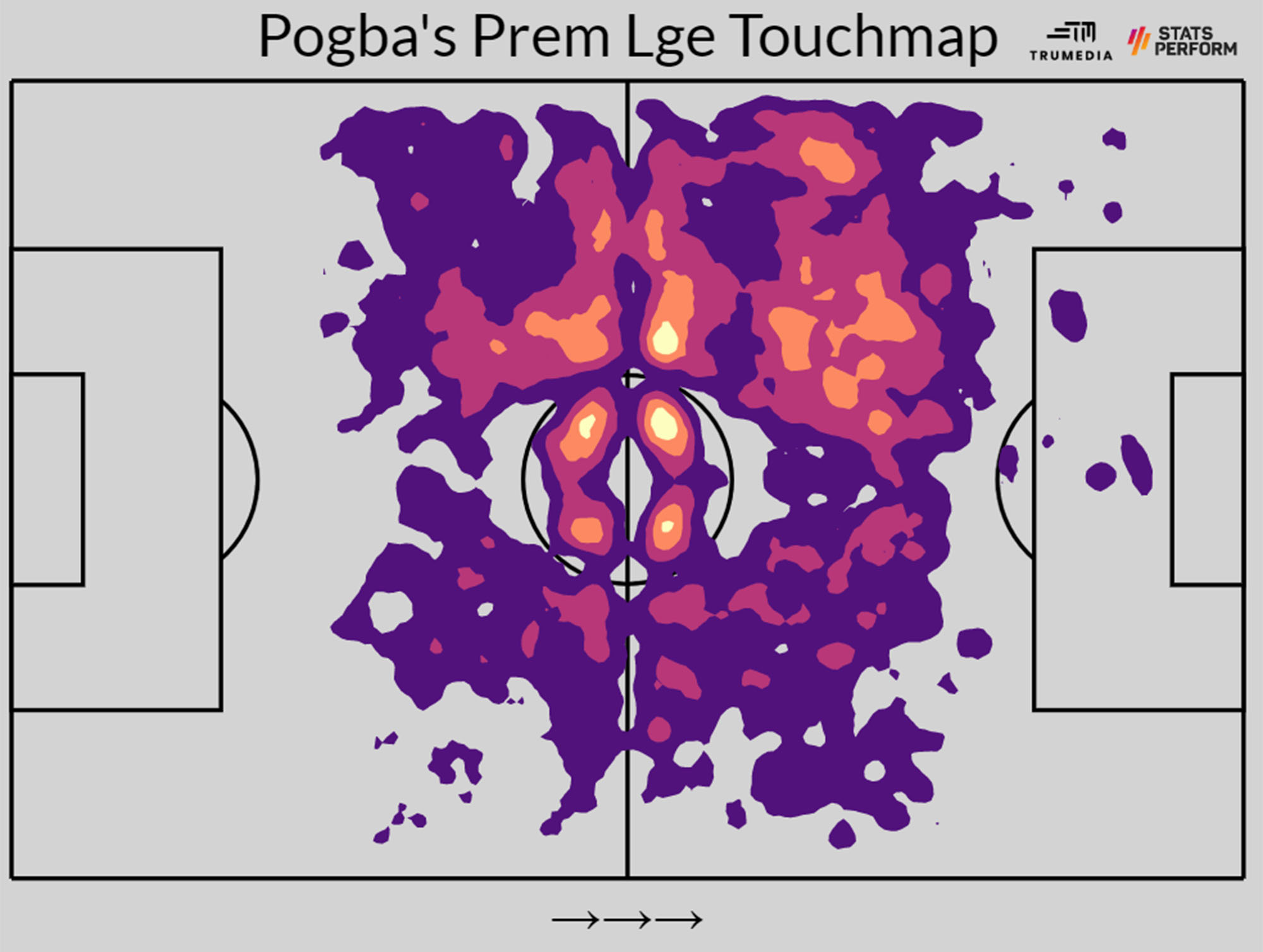 That meant less accurate shots on goal from outside the box. While the smattering of 25-yard efforts is still there, and his shot numbers over the first three seasons at United are up, he was much wilder — likely because of the frustration in build-up play. 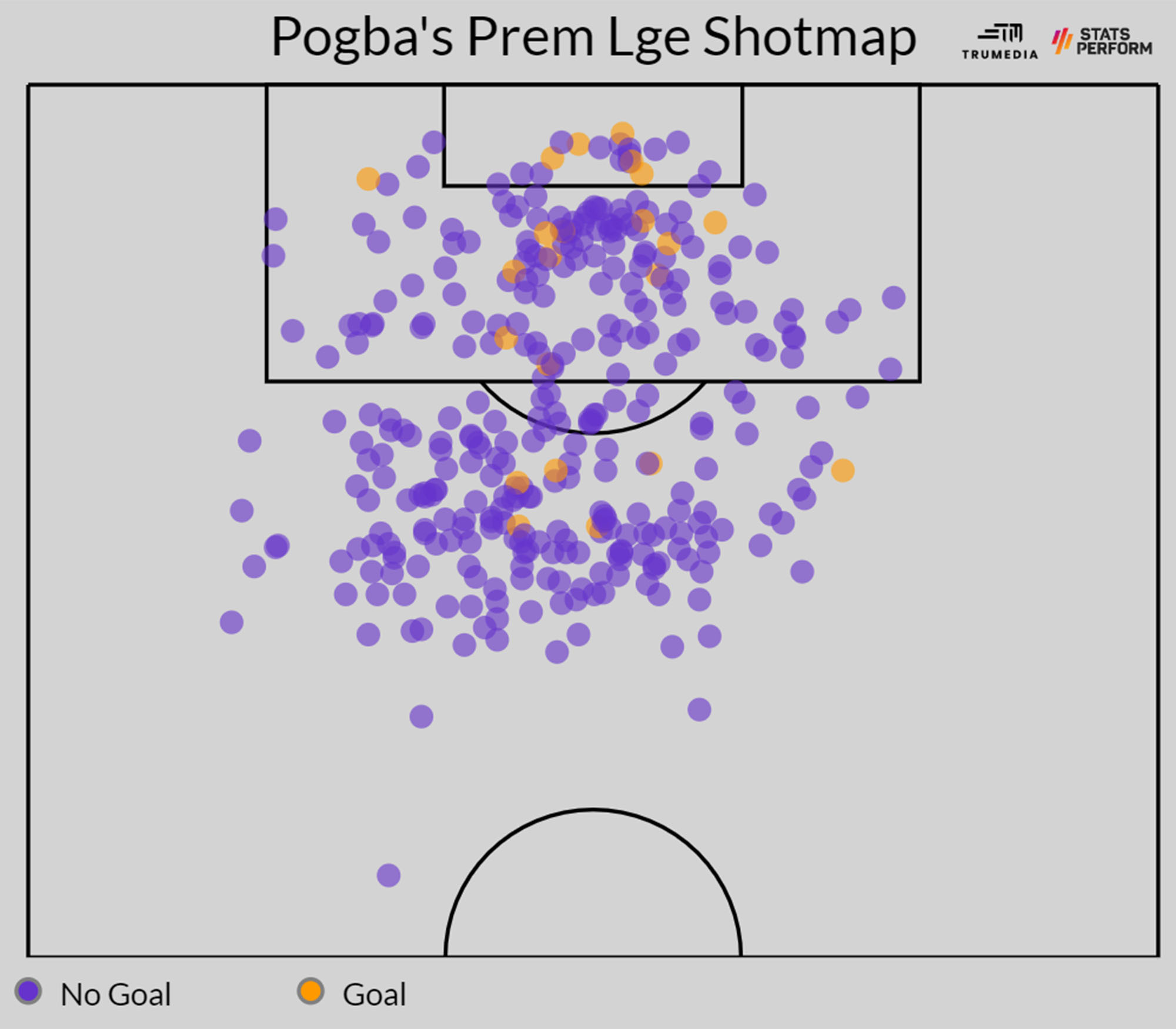 So how does Pogba succeed? Get back to his favoured left-midfield position, for starters. As for the rest?

“I just want the best for me,” he told Uninterrupted. “I’m thinking, putting everything together, taking my time, and I’m just looking for the best, I want to play football, be myself always, and enjoy what I do. I need to enjoy what I do because otherwise I cannot perform well. I don’t want to be thinking negatively. We can be losing games, trophies, but you have to be happy and enjoy yourself — that’s what I’m looking for.”

Christian Eriksen’s back, for Brentford and Denmark, and maybe better than ever after cardiac arrest

Apr 9, 2022 ayman022 Comments Off on Christian Eriksen’s back, for Brentford and Denmark, and maybe better than ever after cardiac arrest 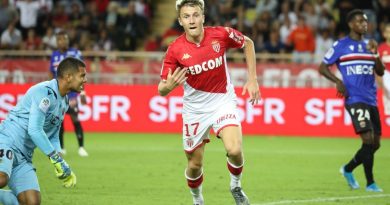 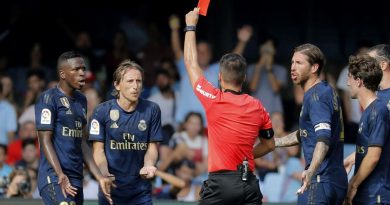 By the numbers – Zinchenko unbeaten in 23, Grealish loses 20 straight