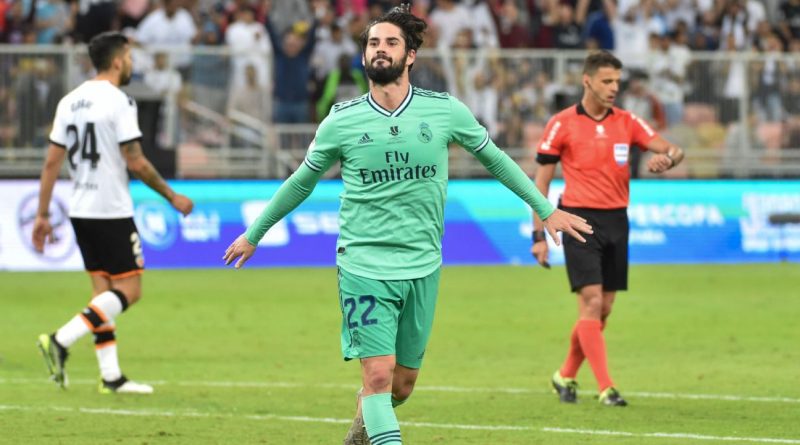 Real Madrid will play the final of the new-look Spanish Supercopa after goals from Toni Kroos — direct from a corner kick — Isco and Luka Modric gave them a comfortable 3-1 win over Valencia on Wednesday in Saudi Arabia.

Kroos spotted Jaume Domenech off his line organising his defence in the first half and went straight for goal, beating the Valencia goalkeeper before he could react in time. Isco got the second after a Modric shot had been blocked, and the Croatian midfielder scored a second-half stunner himself before Dani Parejo grabbed a consolation goal for Valencia from the penalty spot in added time.

Real Madrid controlled this first semifinal of the new Supercopa format from the very start. Valencia looked overwhelmed for long periods and their tempo-setting captain Parejo struggled to get into the game. Zinedine Zidane’s team went ahead early and never looked back. They had started well when these teams met in La Liga in December, too, but this time they maintained an advantage they lost after half an hour at Mestalla. It was a comprehensive win marked by some sparkling midfield play. Now Madrid await the chance to win the first silverware of the season on Sunday.

A goal for striker Luka Jovic would have been nice. Zidane described the 22-year-old as “the future” before this game and urged patience. Jovic desperately needs a confidence boost and will have been disappointed to come off, but should get another opportunity to impress on Sunday. Thibaut Courtois will have been disappointed to not have kept a fourth clean sheet in a row thanks to Parejo’s late penalty. Otherwise, this was a very positive night.

8 — Zidane’s plan worked to perfection against an admittedly poor Valencia side. He packed the midfield with five players behind Jovic. It meant the team lacked width, Isco forced out to the left and Federico Valverde to the right, but also allowed Madrid to dominate the ball. Their pressing when out of possession impressed too.

GK Thibaut Courtois, 7 — Fresh from the best performance of his Real Madrid career at Getafe, there was no need for a match-winning display this time. Courtois had little to do against a toothless Valencia, making one straightforward second-half save from a Maxi Gomez shot.

DF Dani Carvajal, 6 — Has been solid if unspectacular in recent weeks. More of Real Madrid’s attacking wide play — usually a Carvajal hallmark — has been coming through Ferland Mendy on the left.

DF Sergio Ramos, 7 — Returned to the team from suspension and had a very quiet evening. There was more to do in the last half hour when Valencia brought on Gomez alongside Kevin Gameiro. Was unlucky to concede the penalty for handball in added time.

DF Raphael Varane, 7 — Almost followed his goal-scoring exploits at Getafe when an early header was well saved by Jaume. Otherwise had as little to do as Ramos alongside him.

DF Ferland Mendy, 7 — Mendy has started more games than Marcelo this season, 12 to the Brazilian’s nine. Injuries have played their part in that, but Mendy has impressed too. He still adopts positions high up on the left when Madrid want to attack, but looks to offer more security in defence. Still needs to improve his final ball.

MF Casemiro, 8 — The deepest of Real Madrid’s midfielders, had the job of marshalling Parejo, who makes Valencia tick, and did so extremely well.

MF Toni Kroos, 8 — Opened the scoring direct from a corner when his quick-thinking spotted Jaume napping and had the technical ability to find the net. There is an argument that Kroos has been Real Madrid’s most consistently impressive performer this season.

MF Federico Valverde, 7 — Rarely disappoints, but this was not his best game. Always offers a goal threat with efforts from distance, and shot just wide around the hour mark when perhaps he could have gone for more control.

MF Luka Modric, 8 — Helped in Madrid’s second when his shot was blocked and fell to Isco. Showed his peerless class leaving Gabriel Paulista on the deck with one second-half touch, and went one better when scoring a sensational third goal. He received the ball on the right, used a step over to deceive the defender and found the net with an outside-of-the-boot finish, making the whole thing look effortless.

MF Isco, 9 — Scored to effectively end the contest before half-time, his first goal in a competitive game since March 2019. Got better and better as the game went on. One lovely second-half run as he danced into the box got the crowd on their feet, and could have scored again but shot over the bar. Outstanding.

FW Luka Jovic, 7 — A big night with Karim Benzema injured, opportunities have been scarce for the €60 million Serbian striker this season. Could have scored before half-time but Jaume made a miraculous save. Won’t have been happy to be taken off near the end.

DF Marcelo, N/R — Replaced Mendy with 20 minutes to go and looked fit in his first game since November.

MF James Rodriguez, N/R — Had been out since October. Came on for Modric and had one late shot into the side netting.

FW Mariano Diaz, N/R — Played the last 10 minutes in his first appearance of the season. 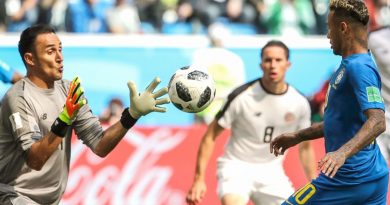 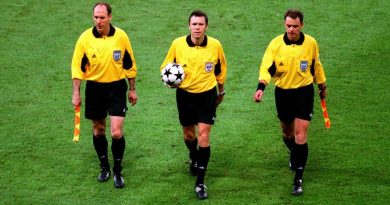 May 24, 2018 ayman022 Comments Off on Champions League final ref Urs Meier ‘You’ll be happy if nothing has happened’ 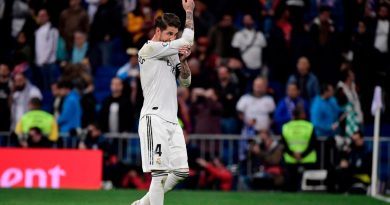