But among all that money changing hands were some truly odd moves. Here, ESPN’s writers assess the weirdest summer transfers that confused them the most.

I mean, what the heck?! Nice fans rightly asked: who is Joe Bryan and what is he doing in a team aiming to challenge for the Ligue 1 title while playing in the Europa Conference League this season? The 28-year-old left-back arrived on loan from Fulham, having previously played for Bristol City, Plymouth and Bath (the latter two on loan.) It made no sense for a club like Nice, with loads of money and plenty of ambition, to sign an average player like him. He probably couldn’t believe his luck.

Chelsea were always going to face a difficult task in this window given two key factors: sanctions from the UK government imposed on previous Russian owner Roman Abramovich preventing them from speaking to potential new players until the takeover was completed at the end of May, and the club’s new owners needing time to immerse themselves in football, filling a void left by the departures of key transfer-related personnel. However, all that does not completely exonerate them from criticism for paying potential £63m to sign Brighton left-back Cucurella.

The Spain defender is a good player and has potential to improve, but Manchester City pulled out of a deal because they wouldn’t pay an asking price of around £50m. Yet Chelsea ended up paying £56m, with another £7m in add-ons, in part because they only wanted to loan Levi Colwill in return rather than allow him to join Brighton on a permanent basis. As one agent suggested to ESPN, Chelsea therefore effectively paid their own loan fee.

I​​t wasn’t a weird signing in the sense that Chelsea needed to bring in a recognised goal scorer, having allowed Romelu Lukaku (loan to Inter Milan) and Timo Werner (€30m to RB Leipzig) to leave the club, but every other aspect of the deal just doesn’t stack up.

Primarily, this was 100% a Thomas Tuchel signing. Tuchel built a strong working relationship with Aubameyang at Borussia Dortmund between 2015 and 2017, so despite the former Arsenal forward’s reputation as a difficult player to handle — the Gunners cancelled his contract in February, allowing him to join Barcelona on a free transfer, because manager Mikel Arteta lost patience with his lack of discipline — Tuchel believed he was a risk worth taking.

But less than a week later, Tuchel was fired as Chelsea coach, so why did the board sanction a deal for a player who would likely be incompatible in the plans of any new boss? Aubameyang is anything but a team player. If he doesn’t score, he doesn’t contribute. If he doesn’t play, he contributes even less and brings all kinds of other drama to the table. How Potter handles him remains to be seen, but it was a strange move. Very strange. — Mark Ogden.

Poor Gilmour. The 21-year-old midfielder wanted to leave Chelsea for Brighton to work under Potter and then a few days later saw Potter leave Brighton for Chelsea. Gilmour is highly rated but has reached a stage of his career where he needs to play regular games and a move to Brighton might still work out. But it raises the question why Chelsea were prepared to let him move, knowing that Tuchel was about to be sacked and replaced with Potter.

There is a suggestion Chelsea didn’t want him to leave but the Scotland international made a case that working under Potter was too good an opportunity to turn down. Again, if that’s the case and Chelsea knew at that point that the likelihood was that Potter would end up at Stamford Bridge in a matter of days, then Gilmour has every right to feel aggrieved. The only thing he can do now is prove Chelsea wrong and realise his potential at Brighton. — Rob Dawson.

Soler leaving Valencia was no surprise — the club had made it known they would need to let one or two of their best players leave, with the €33m received from Wolves for Goncalo Guedes not enough to balance the books — but both the destination, PSG, and a paltry €18m fee for the midfielder raised eyebrows despite only having a year left on his contract. The 25-year-old was one of Valencia’s captains and the team’s creative hub. Now he’s set to be a bit-part player at PSG, where he hasn’t even made it off the bench so far this season.

Another confounding move was Valencia’s bid to placate fans’ anger at Soler’s departure by signing 35-year-old Edinson Cavani on a free transfer. Coach Gennaro Gattuso was forced to admit the forward was unable to train hard due to the injury risks associated with his age — having been out of action since leaving Manchester United on a free transfer this summer — and the Uruguay international is yet to feature in any capacity. — Alex Kirkland.

De Tomas scored 17 LaLiga goals for Espanyol last season; only Celta Vigo‘s Iago Aspas (18) and Real Madrid‘s Karim Benzema (27) scored more. His performances earned him four caps for Spain and during the transfer window, he was linked with Man United, Bayern Munich, Sevilla and many other clubs competing in European competition. Which makes it even more perplexing that he eventually signed for his former side Rayo Vallecano … after the window closed.

Yes, De Tomas completed a move to Rayo this week for a reported €8m, with €3m in add-ons, on a five-year deal after his relationship with Espanyol soured for non-sporting reasons. But he will not be able to play for Rayo until January as he can’t be registered. Any hopes of making the Spain squad for November’s World Cup appear to have gone up in smoke.

What makes the transfer even more curious is that last week the Rayo president, Martin Presa, pressed charges against one of De Tomas’ agents for headbutting him during negotiations to sign the striker. Though both appear to have been able to separate personal matters from business to get the deal over the line. — Sam Marsden 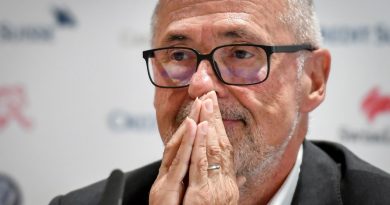 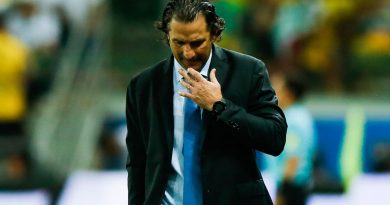