Amid all the action at the Euros and Copa America, the summer transfer window has opened for some leagues with Europe’s biggest clubs looking to make a splash in the transfer market. Check out the latest gossip below, and see see all official deals here.

Real Madrid are looking at options to replace Sergio Ramos and they consider French defender Jules Kounde to be the perfect candidate, according to Marca.

Kounde has been linked with a number of clubs this summer, including Manchester United, and Madrid are the latest to consider a move for his defensive talents.

However, the 22-year-old central defender has a buyout clause of €80 million, which could be too much for Madrid president Florentino Perez.

Madrid aren’t currently in a position to pay the premium fee required and as such they’re having to replace Ramos with a limited budget.

The other concern is whether or not Kounde has the same leadership qualities as Ramos to help bring out the best in Raphael Varane and Eder Militao.

Talking of Varane, his contract expires next year, and the Spanish outlet says Madrid could allow him to leave this summer and free up funds to sign Kounde.

Kounde’s employers Sevilla have shown little willingness to accept anything less than his buyout clause.

09.52 BST: England captain Harry Kane insists that the uncertainty over his future at Tottenham Hotspur is not affecting his form for his country at Euro 2020.

Kane, who was the top scorer at the last World Cup with six goals, is yet to score in two games at this summer’s European Championship, and has generally struggled to be influential in his team’s attack.

Asked if a desire to leave Spurs this summer had affected his performances for the national team, he replied: “Absolutely not. All my focus is on how I can help this team and how we can be successful in this tournament.

“I understand from a media point of view there is speculation but I am fully focused on the job here.”

09.00 BST: ICMYI — Barcelona completed the signing of forward Memphis Depay on a free transfer from Lyon, on Saturday.

Depay, 27, will join Barca when his contract with Lyon expires at the end of June. A statement from the Catalans said he will sign a deal with the club until the end of the 2022-23 campaign.

Barca first tried to sign Depay — who played in the Netherlands’ 3-2 Euro 2020 win over Ukraine on Sunday — last summer at the request of coach Ronald Koeman.

Personal terms were agreed with the player and a fee of around €25m was set with Lyon, but the club were unable to accommodate him within their La Liga-imposed wage cap.

Koeman, who worked with Depay previously when he was the Dutch national team coach, wanted the forward again in January. However, Barca had no president in place to sanction a transfer.

– Manchester United are growing increasingly concerned that Paul Pogba will leave the club for nothing next summer, reports the Mirror. They believe the France international is ready to run his contract down and walk away from Old Trafford as a free agent. United were forced to trigger a 12-month contract extension to his existing deal, but they’re now desperately trying to persuade the £89m-rated midfielder to sign a new contract.

– New Real Madrid boss Carlo Ancelotti could look to his former club Everton in an effort to bring striker Dominic Calvert-Lewin to the Bernabeu, reports the Sun. Ancelotti has described the 24-year-old striker as “the complete player,” and the Italian believes he can persuade the Toffees to let him go for £50m. Everton are under growing financial pressure and owner Farhad Moshiri could be tempted to let the England international leave Goodison Park.

– Liverpool look set to beat Bayer Leverkusen to the signing of Ghana wonderkid Abdul Fatawu Issahaku, according to an interview with the player’s current club chairman in Football Ghana. In the interview, Steadfast FC chairman Haruna Iddisu states that a deal has been completed between the two sides, despite the fact that Leverkusen looked odds on to win the race for the 17-year-old’s signature. Issahaku has scored eight goals in 13 games for his club, and he starred for Ghana’s under-20s at the U20 Africa Cup of Nations earlier this year.

– Real Madrid are hoping to persuade Eintracht Frankfurt to sign Luka Jovic in order to free up some much-needed funds to land top target Kylian Mbappe, reports AS. Jovic has failed to settle in Madrid but Los Blancos remain confident that they will receive acceptable offers for the Serbia international. Jovic joined Madrid for €60m when he moved to the Spanish capital in 2019, but the club would be happy to recoup €40m for the 23-year-old. Frankfurt have expressed an interest in Jovic, but in order to place a bid they first need to find a new home for Andre Silva.

– On the subject of Andre Silva, Barcelona are looking to land a top-level centre-forward to join the club alongside Sergio Aguero and Memphis Depay, and Sport believes the 25-year-old Portugal striker is the latest name on their list. Silva was believed to have been on Barca’s radar a few seasons ago when he was at Sevilla, but his 28 goals in 32 games last season has persuaded the Catalan club that now is the time to make a move. Frankfurt could be tempted to accept an offer of €35m, and agent Jorge Mendes is believed to be working on the deal. Manchester City and Atletico Madrid are also interested.

– Barcelona midfielder Miralem Pjanic appears to be on his way back to Italy, with Juve his likely destination, according to Corriere dello Sport. Juventus have been in touch about re-signing the Bosnian on a two-year loan deal, and the two clubs are now said to be discussing his salary. Pjanic is out of the picture under Koeman at Camp Nou, while Juve coach Max Allegri considers him as a potential replacement for Aaron Ramsey and Adrien Rabiot. 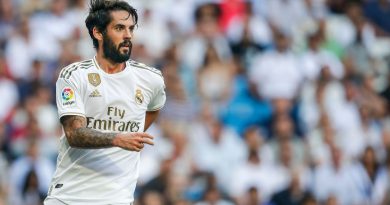