Sheffield United announced on Saturday that manager Chris Wilder has left the club by mutual consent, with the team bottom of the Premier League standings on 14 points.

The Yorkshire club announced the expected news on its website after rumours had been circulating for 24 hours that the 53-year-old would be leaving.

Sheffield United, who Wilder guided back to the Premier League in 2019, are bottom of the table, 12 points adrift of the safety zone with 10 games remaining.

“We are confident that all Blades fans around the world will join us in thanking Chris for his hard work, commitment and expertise in driving the club,” a statement said.

“Now the club will turn its attention to completing the season as strongly as possible and if we are relegated, to prepare for the Championship.”

Wilder marked more than 200 league games in charge for the club earlier this season, although there has been little reason for celebration in a difficult campaign.

They have won only four of their 28 games, although one of them was a 2-1 victory at Manchester United.

It is a stark contrast to last season when they impressed on their return to the top flight, punching above their weight to finish in ninth spot having challenged for a European place.

They lost their last three games of the COVID-19-hit season, though, and that form spilled over into this season, with their first league win coming in their 18th game.

Wilder will be remembered fondly by the club’s fans as they were in the third-tier when he took charge.

“Being manager of Sheffield United has been a special journey and one I’ll never forget,” Wilder said.

“I was delighted to be given the opportunity in 2016 and have been delighted with the success we have achieved, including two promotions and a highest ever Premier League finish.

“I’d like to thank everyone who has contributed to the Club’s accomplishments along the way, including the players, staff and, in particular, the supporters.” 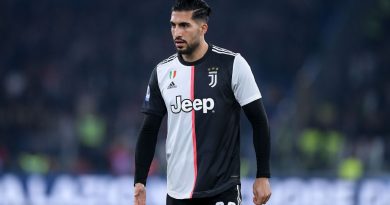 Emre Can agrees to join Borussia Dortmund from Juventus

Jan 31, 2020 ayman022 Comments Off on Emre Can agrees to join Borussia Dortmund from Juventus

Jun 17, 2022 ayman022 Comments Off on Carlos Tevez to be announced as Rosario Central coach after retirement from football